Back on August 17th, I published an article predicting that the strong housing market, increasing home improvement and renovation activity during the pandemic and rising lumber prices would benefit Canadian lumber stocks. Although no longer a secret, there remains plenty of upside in the stocks as the high lumber prices work their way into earnings for the sector.

According to the US Census Bureau and the U.S. Department of Housing and Urban Development (announced Jan. 21st, 2021):

This situation is similar in Canada.  One of the stocks I featured in the article was West Fraser Timer (WFG).  West Fraser is one of North America’s largest lumber manufacturers with 45 facilities in British Columbia, Alberta, and the southern U.S.

On February 1st, 2021 the company completed the acquisition of Norbord Inc., an international producer of wood-based panels (Oriented Strand Board) based in Canada.  A unique buying opportunity exists in the short term as analysts work towards understanding the fundamentals of the now combined company.

Despite the pandemic, West Fraser (data prior to the acquisition) enjoyed a respectable 2020:

Norbord also reported record 2020 (in US dollars) results prior to the acquisition, with  Adjusted EBITDA of $865 million for the full-year 2020 compared to $138 million in 2019.  Again, the results were bolstered by high prices for OSB.

I estimate the stock is trading at only 3X EBITDA –  this is one cheap stock.  And the good news is that earnings corresponding to these (chart from tradingeconomics.com) high lumber prices are just beginning to drop to the bottom line. 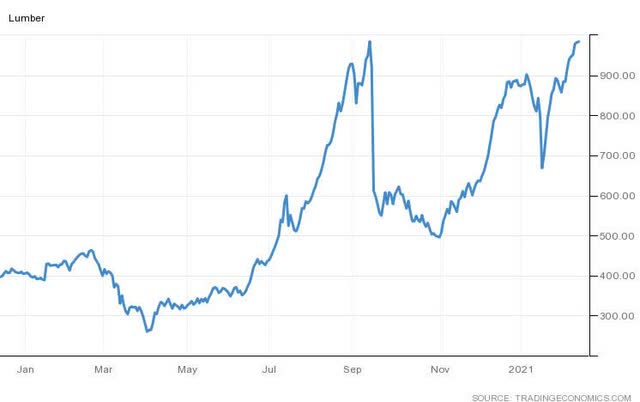 My own expectation is that WFG trades at 5X EBITDA or at a target price of $115 to $120 in just a few months time as the earnings power of the combined companies becomes more evident.  My target does not take into account obvious synergies in terms of distribution and operations afforded by the acquisition.

Malvin Spooner is a veteran money manager, former CEO of award-winning investment fund management boutique he founded. He authored A Maverick Investor's Guidebook which blends his experience touring across the heartland in the United States with valuable investing tips and stories. He has been quoted and published for many years in business journals, newspapers and has been featured on many television programs over his career. An avid motorcycle enthusiast, and known across Canada as a part-time musician performing rock ‘n’ roll for charity, Mal is known for his candour and non-traditional (‘maverick’) thinking when discussing financial markets. His previous book published by Insomniac Press — Resources Rock: How to Invest in the Next Global Boom in Natural Resources which he authored with Pamela Clark — predicted the resources boom back in early 2004.
View all posts by Mal Spooner →
This entry was posted in Random Thoughts, stocks and tagged housing market, lumber, maverickinvestors, prices, stocks, west fraser. Bookmark the permalink.