Funeral Stocks – one of the few businesses still operating.

Typically lower beta stocks, the death care industry stocks have sold off with the rest of the market, and although revenues from services are being squeezed by social distancing, it is likely that funeral services and memorials are being postponed rather than cancelled altogether. This article focuses on the two funeral services stocks that are publicly traded, Service Corp. International (SCI) and Carriage Services Inc. (CSV). There are other companies that provide caskets and monuments, but it is the full service providers that I find interesting from an investment perspective. (NOTE: I originally published a version of this for US investors on seekingalpha.com, but have added a brief discussion of an interesting Canadian growth stock at the end).

Prepaid services (revenues held in trust) account for a significant portion of their businesses and postponed revenues will be realized once the pandemic has run its course.

Service Corp. International (see graph) has by far been the superior performer over the past five years, still up (excluding dividends) 74% compared to about 41% for the S&P 500 at recent price levels. The stock is now down nearly 28% from its 52-week high. The following is not a direct quote but paraphrases (from the company 10-K) their business:

SCI is North America’s largest provider of death care products and services. At December 31, 2019, the company operated 1,471 funeral service locations and 482 cemeteries (including 290 funeral service/cemetery combination locations), which are geographically diversified across 44 states, eight Canadian provinces, the District of Columbia, and Puerto Rico.

Deemed an essential service, death care service companies continue to generate revenues even as many other industries are in lock-down mode. The question is whether or not their financial situation is stable enough to weather the temporary dampening of activity.

The generous operating margins enjoyed by these businesses and ample cash flow (evidenced by interest coverage) suggest there is unlikely a threat to the dividends. For SCI the payout ratio is a manageable 36%. Over time, the company has managed to grow dividends consistently, as well as buy back shares – evidenced by the following chart.

The potential for a significant rebound once social distancing is relaxed, will set the stage for upward surprises in earnings post-crisis. Analysts have of course been revising down their earnings estimates aggressively as they are prone to do during a crisis. The key will be watching to determine if they’ve been too aggressive setting the stage for positive surprises. For the coming first quarter Zacks noted:

“The consensus EPS estimate for the quarter has been revised 26.21% lower over the last 30 days to the current level. This is essentially a reflection of how the covering analysts have collectively reassessed their initial estimates over this period.”

Service Corp. is the Cadillac of the industry, but I’ve included Carriage Services as a potentially more risky but potentially higher small-cap growth story in the sector.

Both companies stand to benefit longer term from the aging of the US population. By the year 2030, all baby boomers will be over 65 years of age. 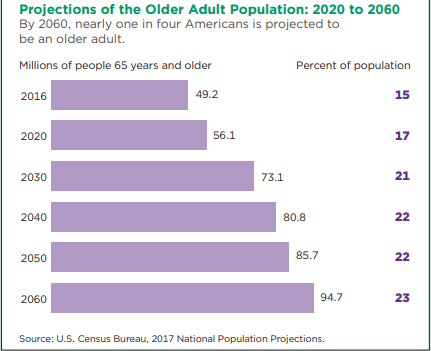 Demographics would suggest that there’s no longer term risk to owning these stocks. Are they good value at these price levels? Clearly, they are better value than they were prior to the market meltdown. I would argue that the stocks now are fair value, and due to their inherent resistance to ordinary business cycles and a growing revenue base going forward, that fair value is a bargain price (given the extraordinarily low level of interest rates currently).

Carriage Services is much smaller (not on the radar screen of big institutional investors) than SCI but may therefore be a higher growth story. The operating margin is better, and its business is similarly full-service.

“Our funeral homes offer a complete range of high value personal services to meet a family’s funeral needs, including consultation, the removal and preparation of remains, the sale of caskets and related funeral merchandise, the use of funeral home facilities for visitation and remembrance services and transportation services. Our cemeteries provide interment rights (grave sites and mausoleum spaces) and related merchandise, such as markers and outer burial containers. We provide funeral and cemetery services and products on both an “at need” (time of death) and “preneed” (planned prior to death) basis.”

The Carriage dividend payout ratio is 37.5%, despite difficult earnings years in 2017 and 2018 primarily due to a number of acquisitions. In other respects, finances are very similar to SCI – for instance, the debt-to-cash flow ratio for both companies is about 6X.

A Canadian company (market cap of $574 million) called Park Lawn Corporation (PLC on the TSX) is another death care business that has had a rough year due largely to an aggressive growth program of late, having acquired six businesses valued at $180 million.  The stock has a higher beta (1.40) but the high growth trajectory (ambitious) accounts for the added risk.  Another consideration (or potential opportunity) is the company is seeking a new CEO – with the former president (Brad Green) acting as interim CEO.  The opportunity is the that the next CEO will drop the strong revenue growth to the bottom line.

The release quoted (former Chairman and CEO Andrew) Clark as saying, “It has been a tremendous privilege to lead PLC and build a strong and highly capable management team over the last eight years.  I am grateful to have led a team that transformed PLC from a small business with six cemeteries into one of the largest and most well-respected operators in our industry…”

The stock, around $19 recently is down 38% from its 52-week peak.  EBITDA covers interest expense by about 5.5X  and it pays a dividend of 2.4%. Earnings per share is only about 25 cents so the P/E is rather large but this isn’t unusual when revenue growth is robust:  ” The results show strong revenue growth, with a year-over-year increase of 51.3% and an increase of 36.2% for Q4, as compared to the same period in 2018.”

The only risk to my thesis about these stocks is a prolonged period of physical distancing which will dampen margins, but it seems that prompting by President Trump to open up the US economy will mitigate this risk.

Malvin Spooner is a veteran money manager, former CEO of award-winning investment fund management boutique he founded. He authored A Maverick Investor's Guidebook which blends his experience touring across the heartland in the United States with valuable investing tips and stories. He has been quoted and published for many years in business journals, newspapers and has been featured on many television programs over his career. An avid motorcycle enthusiast, and known across Canada as a part-time musician performing rock ‘n’ roll for charity, Mal is known for his candour and non-traditional (‘maverick’) thinking when discussing financial markets. His previous book published by Insomniac Press — Resources Rock: How to Invest in the Next Global Boom in Natural Resources which he authored with Pamela Clark — predicted the resources boom back in early 2004.
View all posts by Mal Spooner →
This entry was posted in Random Thoughts, stocks. Bookmark the permalink.