SINGAPORE, April 21 (Reuters) – Golds decade-long bull run could continue in the next four years, though at a slower pace, with positive inflation risks partially cooled by a shift towards more normal economic conditions, analysts polled by Reuters said on Thursday.

The poll quoted above predicts gold may get to $1700 over the next 4 years or so.  That equates to a compound return of roughly 3% per annum.   Unless you believe gold is on its way to $3000 over the next few years, with no interuptions, might as well hold cash.  And I’d suggest that if Barrick were as optimistic about the yellow stuff, they’d be aquiring another gold company rather than copper producer Equinox for their $7.3 billion.

Before you run out and invest everything in copper stocks, I can assure you that the management of these companies is no better at forecasting metal prices than you are.  Although I sympathize with Barrick’s effort to further diversify away from gold (they too, are no doubt concerned about a bubble) into copper, their timing as usual is a bit suspect. 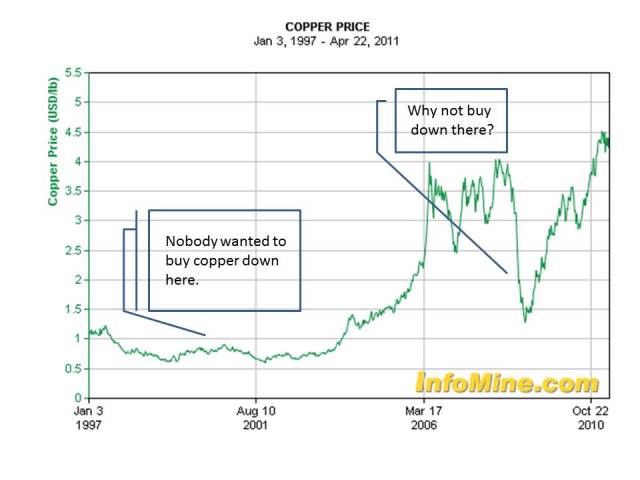 With that out of the way, I’d like to address some excellent remarks posted by Aminul in the comments section, some of which is reproduced below:

In a world of slowing supply and limited spare capacity, any number of things can spike commodity (sic) and keep it permanently there, including inflation, geopolitical events and currency movements. Secondly, why do you think that the US$ weakness is “short term”? Are the twin effects of a huge deficit and excess supply of money going away shortly? Other than these two points, I fully agree that there would be a broader-based US rally, especially in manufacturing and service supported by a weak US$.

First, I predicted in my first book (2004’s Resources Rock) the now ‘old news’ shortages in commodities and corresponding price increases.  I would remind you that pricing has since then continued to be very volatile subject to an array of variables…the rise in commodity funds, supply and demand dynamics and so forth (captured in the copper graph above).  No price spike will ever be permanent.  Several previous spikes in the price of oil were believed to also be ‘permanent’ over the years (see my earlier postings or read my new book) only to prove shortlived.  In an earlier blog posting, I merely meant to point out that whenever the investing herd believes a price spike is permanent (as hinted in the quoted comment, you may also believe) then there’s no money to be made betting on it.

Expressed in financial analyst ‘jargon’ stock prices (i.e. the market) have already fully discounted or taken into account high pricing in increasingly optimistic forecasts.  I think of it as kind of like a dog chasing is tail.

But the demand for the underlying stocks has been satisified (everyone has bought them) and the dominant risk now is that any sign of the price spike receding will prove devastating to these same stockholders when the selling begins (no more buyers are out there.) They risk becoming stuckholders (no spelling error).

The weak US$ is a similar scenario.  Everyone expects it to stay sloppy and get weaker forever, but the self-fulfilling prophecy must be ‘short term’ (in this case, I mean a year or so).  The laws of supply and demand (and pricing adjustments) dictate that eventually the buck will be so cheap that China and India would be tempted to move their call centers and factories to North America.  Okay, that example might be a bit over-the-top, but it makes the point I think.

You agree with me that a broad based rally would likely to be ignited by the low US$.  For the record, I think the broadening of the rally is well underway already – just being overlooked.  Logically over time, the rising overseas demand for cheaper goods and services payed for in US$ will cause the dollar to reverse direction and strengthen – flexible exchange rates allow markets to be self-equilibrating.

Finally, I love this question that was posed:  Then why is the case that while other inflation hedges such as real estate are languishing whereas commodities bounced back a short while after the global financial crisis?

Real estate is languishing in the US for structural reasons – the house of cards (asset backed junk paper) both caused the housing boom, and the subsequent financial crisis when its foundation – US housing market -collapsed (beginning as early as 2005).  Real estate in other markets (like Canada) have in fact rallied along with commodity prices.  Investor psychology has transitioned.  The first wave of rising commodity prices (more than five years ago) was indeed due to demand outstripping supply, but TODAY I believe a sort of bubble is emerging ….gold and commodities are being called inflation hedges because the pure fundamentals no longer support the trend. If we don’t run into a bout of hyperinflation, then the bubble will burst.  In my mind a more sensible bet, is captured in your comment about US real estate languishing.  Yes, the consensus is that real estate in America is dead money.  But if in the near future things change even marginally…….

“U.S. new home sales beat expectations in March with an 11.1% jump to 300,000 units annualized from February’s upwardly-revised-but-still-a-record-low 270,000 units (initially pegged at 250,000). This is the first and the largest increase since December but sales remain 21.9% below year-ago levels and are still 78% below the peak.”

…..then somebody’s gonna make alot of money by investing in a recovery in US housing.  Despite the news just quoted, home sales remain far below normal levels and prices are still in the dumpster.  Keep in mind though that US real estate stocks will go up long before we see any real data confirming a housing recovery.  After all, it wasn’t until after a full year of recession that the researches finally declared we’d had a recession.    Buy low, sell high!

Malvin Spooner is a veteran money manager, former CEO of award-winning investment fund management boutique he founded. He authored A Maverick Investor's Guidebook which blends his experience touring across the heartland in the United States with valuable investing tips and stories. He has been quoted and published for many years in business journals, newspapers and has been featured on many television programs over his career. An avid motorcycle enthusiast, and known across Canada as a part-time musician performing rock ‘n’ roll for charity, Mal is known for his candour and non-traditional (‘maverick’) thinking when discussing financial markets. His previous book published by Insomniac Press — Resources Rock: How to Invest in the Next Global Boom in Natural Resources which he authored with Pamela Clark — predicted the resources boom back in early 2004.
View all posts by Mal Spooner →
This entry was posted in Random Thoughts and tagged aquiring, Barrick, bubble, buck, china, commodity, conditions, copper, deficit, demand, dollar, economic, Equinox, frenzy, gold, guidebook, India, inflation, investors, mal, malvin, manufacturing, maverick, metal, money, prices, producer, service, silver, spooner, stocks, supply, US rally, US$. Bookmark the permalink.