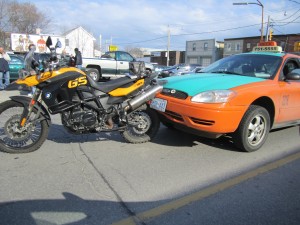 Most bikers aren’t this lucky! A friend of mine snapped this shot in downtown Toronto, Canada. All kidding aside (like he didn’t even have to use his kickstand when he got off the bike), virtually ALL collisions between a bike and an authomobile/truck are extremely bad. We all have friends that have been messed up badly and worse.  I figured why not offer some advice (I think it’s good advice, you have every right to disagree) not just for novice riders, but to all of us who tend to get lazy after years of touring and forget some basic safety precautions; or let the wind and the sunshine lull us into a doze while sitting on a landrocket.  Let’s deal with rain, since that’s what I have to contend with today when I’d rather go for a spin.

RAIN – Can be more or less dangerous depending on where you live. In the southern US, it causes the oil to rise and no more grip. In Texas, I remember trying to turn (slowly) onto the “on” ramp of the highway, and the bike just kept going straight (slipping). What did I do? Straighten the front wheel (so as not to go down) and slide forward for a bit, gently pumping the brake to slow down. Once grip was evident again, I made the turn.

GROUP RIDING IN THE RAIN – There are as many opinions as bum holes when it comes to group riding. I was an officer in our Toronto HOG Chapter for many years. We wouldn’t let anyone ride with our group without taking them out in a smaller group for training. Novices tend to ride too far behind and get stuck at traffic lights, let hot dogging motorists weave in and out of the group, and seldom lean their bikes enough in turns. Dangerous! In the rain, they get even further behind. It is NOT safer for the entire group to slow down to a crawl – a trucker or motorist has enough trouble gauging distance from behind a bike in the sunshine, never mind when their screen is wet and their wipers are going. They can be going 70 mph and may NOT be able to slow down; and the risk of bowling over MANY bikes at once is huge. If you cannot go with the flow do NOT ask the entire group to slow down – get off the highway and go home carefully. Most groups have signals that a rider can use to indicate he/she is leaving the goup (usually given to the last guy or “sweep”). Oh, and when a car cuts in front of you (in rain or shine) or stops too fast, DON’T panic and lock your brakes unless you have ABS. See more about emergency situations below.

USE your mirrors AND your NECK – The photo above should remind all of us that it’s as important to know at all times what is behind you as it is to know what’s beside you or in front. If you are cognizant of something coming too fast, you can move over to the side quick or edge more forward to lessen the likelihood of actual impact. And don’t just look beside you and end it. If there’s a panel truck there, or someone on a cellphone in their vehicle it’s GUARANTEED they will come over into your lane and hit you – yes, even if you thought they saw you. Steer clear – accelerate or slow down so you’ve room to get away from trouble – always assume the worst.

EMERGENCY MANOEUVRES VARY – It will depend upon the situation, but are almost always counter-instinctive when on two wheels.  A bike (remember your training) will go straight if the wheels are locked so applying the brakes and swerving at the same time mean you are going down. This might seem like the best solution (sometimes it can be) but if it’s a panic reaction usually there’s a better alternative. I had a lady that was in the lane to my left, on a rainy day.  She decided to turn hard right onto a street from the wrong lane (yes, cutting me off).  I figured I could slam on the brakes and swerve (quick thinking is possible when not in panic mode) – i.e. go down – OR I could brake in control knowing there is a chance I’d slide into the car but at a much reduced speed.  I elected for the second alternative, keeping my front wheel straight and braking, and stopped about three inches from her car.  She apologized and NO I didn’t yell at her or give her grief….life is too short for venting on stangers who make stupid mistakes. I made it out unscathed and went on my way grateful neither I nor my bike was damaged.

NOTHING SUCKS MORE than dropping your bike – Experienced bikers have already done it many times but we should all remember how hard it will be for the novice to get back on. A good coach won’t tease or taunt someone who goes down. Share your own similar mishaps with them (misery loves company), encourage them to get back on the bike if it’s not damaged, or hang around for the tow truck and provide tips on how to fix the bike cheaply.  On one trip in Texas a good friend was riding behind me to my right (in scatter formation) – I put on my turn signal indicating my intention to pull into a driveway and he just lightly touched his brakes on an oily wet surface . It was the road condition, not his skill level that made the bike go down. He was okay, but some parts were broke. We all spent the next few hours going to get the parts and install them (rather than him suffering the insurance deductible) and the distraction got his confidence back pretty quick. And we all had a good time.

KEEP BIKE SAFE – Don’t just inspect your own bike, which should always have good brakes, safe tires and working lights. If in a group, and you notice that one or more of the other bikes have tires that are worn with not enough tread, or their brakes sound funny (unless they just installed new rotors or pads they should be pretty quiet) or the bike just doesn’t look cared for, then politely ask them not to ride with you or just don’t go with the group.  One bike can easily take down several. If you’ve some suggestions I”ve missed, please add a comment.