The last recession was unequivocally a housing bust.  Home sales plummeted and housing starts hit the skids.  But then, the recession was indeed caused by a housing crisis:  The mortgage-backed security scam  ultimately destroyed the housing market.  Today, we’re confronted by something altogether different – a shutdown of massive proportion caused by a pandemic.  Could behavior also be altogether different?

Are we about to experience a decline in home sales as people work from home?  Are they really going into complete isolation?  What we’ve seen in recent weeks – lower mortgage rates have inspired people to re-negotiate their mortgages, and in some cities sales of homes have picked up considerably. 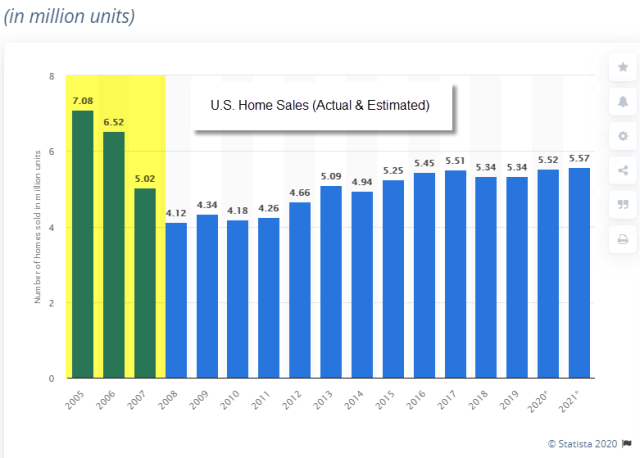 After all, shopping for a home doesn’t require getting stuck in a crowd.  A house is a far better defense against viruses than large multiple-unit dwellings like apartment buildings and condos.  And mortgage rates are at record lows.  Perhaps the stage is set for another boom in housing?

Coronavirus doesn’t seem to be hurting real estate activity in Canada.  In Vancouver:

Unlike the stock market, COVID-19 hasn’t affected the Lower Mainland real estate market — at least, not in a negative way.  A friend of mine just closed on an apartment for $500,000 where she had to deal with a bidding war and ended up paying over asking. Open houses are still well-attended and quality properties are being snapped up quickly. Even detached homes at higher price points are starting to move. CBC News · Posted: Mar 14, 2020

The situation in Toronto has also been busy so far this year:

Housing prices in major urban centres, but particularly Toronto, have been escalating dramatically since January due to a combination of low supply and sky-high demand. According to the Toronto Real Estate Board, sales in February 2020 were up 46 per cent from a year earlier, and prices were up 17 per cent. Financial Post March 13, 2020.

Despite the current frenzy to buy homes, most ‘experts’ suggest prices will not rise and sales activity will slow due to coronavirus.  My experience has taught me that experts are almost always dead wrong – after-all, they didn’t expect markets to ever correct did they? (although without shame they all say “we saw this coming” while having said they exact opposite weeks before – kind of like Donald Trump.)

Why is this boom or bust question important?  It may very well be that as investors run for cover in other sectors, the building (lumber?) sector might just be a solid place to park.  In the event that its a bust, then no doubt housing and related industries will be the fastest out of the gate when things rebound.  This recession was not caused by a housing crisis, but by something completely different, and investment strategies will have to be completely different.

Malvin Spooner is a veteran money manager, former CEO of award-winning investment fund management boutique he founded. He authored A Maverick Investor's Guidebook which blends his experience touring across the heartland in the United States with valuable investing tips and stories. He has been quoted and published for many years in business journals, newspapers and has been featured on many television programs over his career. An avid motorcycle enthusiast, and known across Canada as a part-time musician performing rock ‘n’ roll for charity, Mal is known for his candour and non-traditional (‘maverick’) thinking when discussing financial markets. His previous book published by Insomniac Press — Resources Rock: How to Invest in the Next Global Boom in Natural Resources which he authored with Pamela Clark — predicted the resources boom back in early 2004.
View all posts by Mal Spooner →
This entry was posted in markets, Random Thoughts and tagged economy, forest products, housing, interest rates, mortgages, real estate, recession, stock market. Bookmark the permalink.