Bonds (ETF’s, Mutual Funds) at Risk even in a Recession

It’s very difficult to teach young adults about how bonds work – although I believe I’ve done a pretty good job of it.  It’s even more difficult to educate adults that had an aversion to math when they were at school (like almost everyone?). In previous articles, I’ve discussed how yield curve inversions (yawning yet?) foretell recessions and more recently that the bond market is telling us it’s pretty much we’re here already – we won’t be able to measure it for months however (economic data is always delayed and revised repeatedly).  If you read to the end, I’ll conclude that holding two bond ETF’s makes sense – one very short term and the other a long term bond ETF. 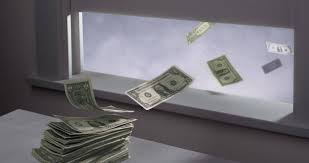 For bondholders a recession is ordinarily a good thing – generally the value (yes bonds trade in the market and have prices) of bonds on average rises in a recession as interest rates fall. Rates decline for a variety of reasons, but most notably the central banks orchestrate this to encourage borrowing to stimulate a troubled economy.  But (and this is a huge but) not all bonds are created equal.  Some are high quality (issued by governments) and at the other extreme there are bonds we call ‘junk’.  In the middle there are corporate issuers, some good & others not so much (these are rated according to their credit risk for the benefit of investors). To complicate matters further, how bonds behave when interest rates change depends on their term (3 year, 5 year, 10 year or 30 years).  The bottom line is you can lose money in bonds and whether you do or don’t depends on multiple factors.

Understanding a bit about the math behind bonds is useful.  This is especially true in times of distress.  For example, corporate bonds are more risky than government bonds, and therefore pay higher yields.  Yet over time, depending upon market conditions the spread (difference between risk-free government bonds and corporates) varies.  Take a gander at the historical spreads from this chart:

As you can see, the spread between US Treasury bonds and Baa (this is one of the ‘ratings’ I mentioned) corporate bonds is hardly constant.  In fact its very narrow right now.  So what you ask? The following quote is from back in November 2019 from the Financial Stability Report of the US Federal Reserve.  It is one of what they consider the ‘vulnerabilities’ of the financial system highlighted in their report:

Borrowing by businesses is historically high relative to gross domestic product (GDP), with the most rapid increases in debt concentrated among the riskiest firms amid weak credit standards. By contrast, household borrowing remains at a modest level relative to income, and the amount of debt owed by borrowers with credit scores below prime has remained flat.

Even then the FED was concerned about excessive borrowing (i.e. like corporate bonds) by companies taking advantage of lax credit requirements and low interest rates.  Why would they be concerned?  When the economy weakens, so does the ability to pay obligations, and this will cause spreads to widen.  If the interest rate for certain bonds rises, something ugly happens to their price (valuation).  For example, imagine a 3% corporate bond issued today.  What would happen happen if the rate of interest (yield to maturity really) expected by investors were to rise for these bonds (spread widens by 1%) to compensate for more risk – perhaps they’re spooked by rising inflation.

The price of the bond would fall (without getting too technical, the price falling causes the total return to a new buyer to increase at your expense if you own the bond). The longer the maturity of the bond (left column) the worse is the loss you experience.  Ouch!  Most people have no idea that owning bonds can lose you money.

What might cause spreads to widen?  I’ve mention higher inflation expectations (and we’re seeing signs of rising inflation) but also deteriorating economic conditions (see previous articles) can be the culprit.  Different  portfolios of bonds (ETF’s, mutual funds, pension funds) have more or less invested in more credit-worthy government securities than others.  WHY?  Because if the manager wants to have a higher yield (to attract your money) then he must lower the quality of the bonds he holds in the fund.  This is why it makes sense to actually read the FAQ sheets and commentaries of the the funds you own.  Most indicated the breakdown of government issues versus corporate or even junk bonds.  Below is a sample:

Most of the portfolio is in high quality government bond issues, and the yield-to-maturity is very low as a result.  As an aside, ‘duration’ is a complex measure of risk for bond funds.  The duration of 6.2% sort of means if the level of interest rates out there in the market rises from 2% to 3% then expect the fund’s value to decline by 6% (i.e. lose).

Contrast the Vanguard portfolio with the SPDR Bloomberg Barclays Short Term High Yield Bond ETF (SJNK) which has a yield-to-maturity of 6.3% (versus 2% for BND) and a duration of 1.67 years.  You might think this is great – awesome yield and low risk of loss.  You’d be dead wrong.  When things do deteriorate,  the spread on junk bonds skyrockets (losses) and troubled companies can pay back the bonds face value (whopping losses).

This quote is telling:

Investors have been feasting on junk bonds in a low-interest rate environment for years, with most fixed income assets other than junk yielding less than the inflation rate or the dividend yield on the S&P 500. However, there has been more competition for the asset class as rates have been rising – with cash, the most low-risk investment, even becoming attractive.

One might think this quote concerns the current environment, but it is from an article published by Reuters back on October 4, 2018.  The more things change, the more they stay the same.  Right now holding cash might be the safest bet, but also a good  hedge would be very short term bonds on the one hand (as short term rates rise they get rolled over at higher rates) and very long term bonds on the other (government seems intent on keeping rate low at least until after the election).  It’s the mid-range that seems at most risk as the yield curve shifts.

Malvin Spooner is a veteran money manager, former CEO of award-winning investment fund management boutique he founded. He authored A Maverick Investor's Guidebook which blends his experience touring across the heartland in the United States with valuable investing tips and stories. He has been quoted and published for many years in business journals, newspapers and has been featured on many television programs over his career. An avid motorcycle enthusiast, and known across Canada as a part-time musician performing rock ‘n’ roll for charity, Mal is known for his candour and non-traditional (‘maverick’) thinking when discussing financial markets. His previous book published by Insomniac Press — Resources Rock: How to Invest in the Next Global Boom in Natural Resources which he authored with Pamela Clark — predicted the resources boom back in early 2004.
View all posts by Mal Spooner →
This entry was posted in bonds, PERSONAL FINANCE, Random Thoughts and tagged bond market, bonds, economy, ETF's, interest rates, recession, risk, spreads. Bookmark the permalink.

1 Response to Bonds (ETF’s, Mutual Funds) at Risk even in a Recession