Since when is the weather an economic barometer? Absurd!

Most of the economic data we’ve been seeing (don’t forget it’s historical data) belies the common thinking that the weather has been dampening economic growth.  The just reported U.S. GDP revision for the 4th quarter (up from 2.4% to 2.6%) suggests things might not have been so bad after all.  Was it reasonable to expect a carbon copy of the 4.1% GDP growth experienced in the 3rdQ of last year?  Of course not.

It seems bad weather didn’t stop consumers from having their strongest shopping spree in three years.

I find the current consensus disturbing, namely that inclement weather is responsible for the slowing of the economy, and when the weather improves there will be a huge resurgence in economic activity.

Behavioral scientists have published a great deal of research suggesting that we people have certain flaws in our thinking.  One that seems to impact the financial markets is our tendency to accept simple explanations readily, because we’re too lazy to delve into causes and effects that are complex.  Monetary stimulus has been easy, employment has been improving – judging by the recent decline in jobless claims – and industrial production has improved.  So why is there so much worry concerning stock markets?  It must be the weather. 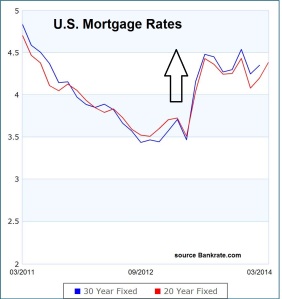 There are more fundamental forces at work.  The softness in the housing market is being shrugged off (it’s the weather!) but in the U.S. housing and related services account for a significant percent of GDP growth.  Tapering is beginning to take its toll.  The leap in mortgage rates is a more rational explanation for the slowdown.  Despite the deluge of fairly positive data releases telling us it’s been pretty good, it’s developments like we’re seeing in housing that normally would suggest things will be not-so-good very soon.

Another flaw in our thinking is assigning too much weight to recent experience.  This is why most folks are demonstrably bad when it comes to managing their investments.  Because the stock market has done well, there are many who believe that it should continue to do well.  They believe this even though there’s no rational reason to believe it.  It is this flaw that causes humans to continue to make the same mistakes – such as buying at market tops and refusing to buy during slumps – over and over again.

An even better indication that the market (perhaps because the economy really is under pressure, and not because of the weather) is about to suffer a setback is the high level of consumer confidence.  I’ve indicated in the past that consumer confidence is a contrarian indicator.  Note in the following chart how markets perennially peak in springtime (usually in April or May).  Consumer confidence seems to peak about the same time.  What almost always follows is commonly expressed as “sell in May and go away!”

Someone might argue that this is too short a time period to be reliable, but rest assured I’ve been a money manager for decades and the pattern just won’t quit.  The recent strong consumer confidence measure bodes ill for the stock market, just as the slump in housing is not good news for the economy near-term.  The weather is sure to improve, but don’t expect much sunshine from the economy or financial markets over the coming months.

Malvin Spooner is a veteran money manager, former CEO of award-winning investment fund management boutique he founded. He authored A Maverick Investor's Guidebook which blends his experience touring across the heartland in the United States with valuable investing tips and stories. He has been quoted and published for many years in business journals, newspapers and has been featured on many television programs over his career. An avid motorcycle enthusiast, and known across Canada as a part-time musician performing rock ‘n’ roll for charity, Mal is known for his candour and non-traditional (‘maverick’) thinking when discussing financial markets. His previous book published by Insomniac Press — Resources Rock: How to Invest in the Next Global Boom in Natural Resources which he authored with Pamela Clark — predicted the resources boom back in early 2004.
View all posts by Mal Spooner →
This entry was posted in markets, Random Thoughts and tagged confidence, consumer, contrarian, economy, GDP, housing, indicator, industrial, investors, jobless, malvin, market, markets, maverick, maverickinvestors.com, monetary, mortgage, overvalued, production, rates, slump, spooner, stimulus, stock, tapering, unemployment, weakness, weather. Bookmark the permalink.