Tempted to buy gold? Better to be patient!

On January 8th, I published Why the price of gold skyrocketed and why it’s over! I’m beginning to see (finally) some acknowledgement that the price of gold inflated by the fear that a collapse in the global financial infrastructure was imminent, is rapidly losing its lustre.

The price of gold has fallen 20% from its peak, and on CNBC the talking heads are asking: ‘Is it time again to buy gold?’ 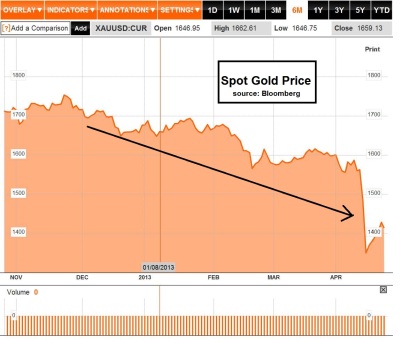 Because the price of gold is more volatile than a manic-depressive without meds, it’d difficult to determine how low (or high) it can go. Why am I sure it can go much lower? I was at Arizona Bike Week and saw some jewellery (biker stuff…skulls and such). I noticed that a sterling silver ring was selling for $300, but a solid gold one was nearly $5000. Now if I wouldn’t even consider buying the gold ring after several JD shots and beers (and the Doobie Brothers performing a few feet away) then it’s obvious that the gold/silver ratio is out of whack.

But wait. If silver is in such abundance, and the global financial system stabilizing with each passing day, should we not assume a more modest silver price will prevail in due course?

If the environment we’re evolving into resembles the 90’s at all, then $5/oz. silver doesn’t seem outrageous which would (at 40 ratio) mean a gold price of $200. Crazy? It’s happened in my lifetime. However, let’s say $15/oz. silver – industrial demand should pick up – which puts gold at $600/oz.

Will bullion escape this perilous situation? Will gold bugs be as fortunate as James Bond in the following clip from Goldfinger?

Malvin Spooner is a veteran money manager, former CEO of award-winning investment fund management boutique he founded. He authored A Maverick Investor's Guidebook which blends his experience touring across the heartland in the United States with valuable investing tips and stories. He has been quoted and published for many years in business journals, newspapers and has been featured on many television programs over his career. An avid motorcycle enthusiast, and known across Canada as a part-time musician performing rock ‘n’ roll for charity, Mal is known for his candour and non-traditional (‘maverick’) thinking when discussing financial markets. His previous book published by Insomniac Press — Resources Rock: How to Invest in the Next Global Boom in Natural Resources which he authored with Pamela Clark — predicted the resources boom back in early 2004.
View all posts by Mal Spooner →
This entry was posted in Random Thoughts and tagged bond, bullion, cnbc, commodities, crisis, financial, global, gold, investor, investors, James, jewellery, mal, malvin, maverick, maverickinvestors.com, metals, precious, price, ratio, silver, spooner. Bookmark the permalink.

15 Responses to Tempted to buy gold? Better to be patient!