Rising i-rates: More than bonds will get hammered!

If you have money in a bond fund that holds primarily long-term bonds, expect the value of that fund to decline, perhaps significantly, when interest rates rise.

FINRA reminded investors about the measure known as bond duration and its ability to predict how much bond prices are vulnerable to changes in interest rates. I covered this earlier in my (October 29th) commentary The Big Bernanke: Bond risk for the duration!

I published many months ago that a ‘yield’ bubble was underway – of course the financial press is almost a year late as usual. Here is a chart of the strong Canadian net sales enjoyed by bond mutual funds. This trend has been worrying me since 2010 (when it began), because when I started as a portfolio manager decades ago you couldn’t get a retail investor to buy a bond fund if their life depended on it. Suddenly post-crisis, it was equity funds that became the pariahs.

Since I published my warning in October about bonds, they’ve been falling in price. A roughly -2% loss may not seem like much but over the same 3-month period the S&P 500 has returned a hugely superior 6.75% (yes, in just 3 months).

Finally, we’ve begun to witness a change in investment fund flows in favour of equities. Although I believe (as I’ve been saying for the past couple few years in this blog and documented in my book) we are in a long-term bull market driven by a slow but steady improvement in economic conditions globally…. timing is everything! 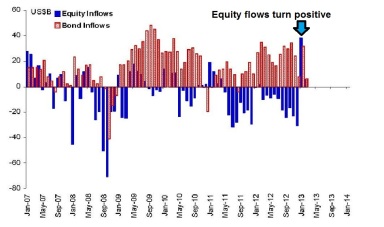 Those rushing into stocks today run serious risks. Stocks have ‘durations’ also, meaning that even if the bond market gets hammered, stocks will be hurt as well. Sensitivity to interest rates depends on a number of factors….dividend yield, financial structure, industry sector and so forth. Some stocks however will fare much better than others.

Normally, one might expect stocks with dividend yields to be safer, but don’t count on it this time. The popularity of ‘yield’ over the past several years has caused the prices of stocks providing dividends to rise far above their intrinsic value (way more buyers than sellers). Acceptable levels of dividend yield in my opinion, have been downwardly biased by the artificially low level of rates offered by US Treasuries – depressed by easy monetary policy. ‘Sentiment risks’ could easily be more damaging than the securities’ duration risks.

The strong relative performance early in this cycle (fueled by a stimulative interest rate environment) of growth stocks versus value stocks also presents unique risks should rates continue to rise. These stocks carry especially high duration risk and are probably overvalued. No doubt this same strong relative past performance is causing new investors to buy growth stocks and funds too aggressively; again at the worst possible time. 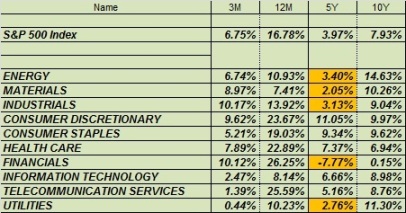 Sectors than have not performed nearly as well over the past several years are under-owned and therefore relatively undervalued. The economy will continue to grow. Of course (as discussed) valuations of several asset categories will suffer a one-time blow but interest rates are rising because the economy is improving and thus the demand for credit will be growing too. Banks will begin to earn a business spread rather than one afforded by central banks, and basic industry will enjoy (finally) some price flexibility and impoving demand. Utilities may not sound sexy, but regulators will grow more lenient – allowing for more ROE as costs rise.

In general though, I totally disagree today with the advice I wrote in 2010 (in my book: A Maverick Investor’s Guidebook published early in 2011) which was brilliant in retrospect:

While the financial crisis frightened the vast majority of investors away from stocks, the maverick investor would have found the high dividend yield a comfortable cushion against risk, especially if he/she selected companies strong financially despite the recessionary economy (Canadian bank stocks for example), or mutual funds invested in stocks paying dividends or other forms of income distribution..

Malvin Spooner is a veteran money manager, former CEO of award-winning investment fund management boutique he founded. He authored A Maverick Investor's Guidebook which blends his experience touring across the heartland in the United States with valuable investing tips and stories. He has been quoted and published for many years in business journals, newspapers and has been featured on many television programs over his career. An avid motorcycle enthusiast, and known across Canada as a part-time musician performing rock ‘n’ roll for charity, Mal is known for his candour and non-traditional (‘maverick’) thinking when discussing financial markets. His previous book published by Insomniac Press — Resources Rock: How to Invest in the Next Global Boom in Natural Resources which he authored with Pamela Clark — predicted the resources boom back in early 2004.
View all posts by Mal Spooner →
This entry was posted in Random Thoughts and tagged bank, bernanke, bond, business, central banks, credit, crisis, distribution, dividends, durations, easy, energy, financial, FINRA, flows, fund, growth, income, industrials, interest, investors, iShares, mal, malvin, materials, maverick, maverickinvestors.com, monetary, mutual funds, net, policy, rates, rising, risk, sales, sensitivity, spooner, stimulative, stocks, telecommunication services, trust, US$, utilities, value, yield. Bookmark the permalink.

1 Response to Rising i-rates: More than bonds will get hammered!