U.S. Employment: It’s getting better all the time!

Although I’ll stick to my warning about the annual perils associated with stock markets during the 3rdQ (i.e. best to avoid – see previous postings) I do keep track of what’s going on in the economy by monitoring what I’ve learned (over 20 years) to be important indicators. Despite the ups and downs of investor psychology, which is always sensitive to noise (Europe financial strains, China growth slowing, fiscal cliffs and elections) there are two key items I consider important.

Fewer and fewer people are being fired (good for the economy) over time.

Yes stocks are in ‘correction’ territory, but we’re years away from a “bubble.”

The following chart evidences the favorable employment trend, based on recent Bureau of Labour statistics. The unemployment rate is less of a concern, since that metric is muddied by structural shifts taking place in the labor market and demographics. Fewer mass layoff events suggest that even struggling sectors (especially manufacturing) are letting go fewer employees on the margin now than they were in previous years. 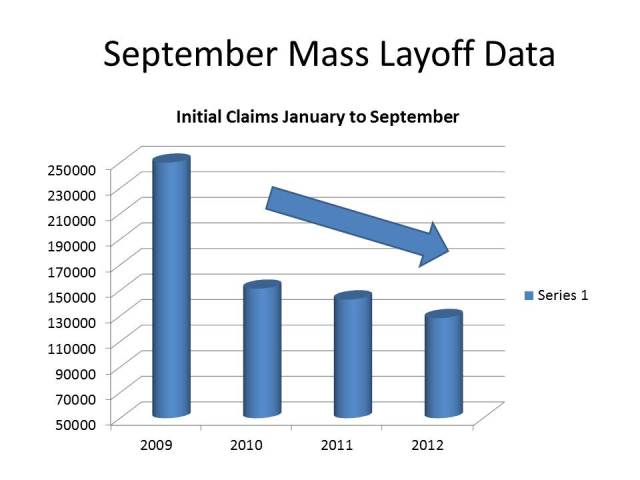 The trend is your friend on the economic front, and continued easy monetary policy is fuel for equities. The big money (institutional investors and hedge funds) will likely wait until January to buy so get in front of them in November and December while the window dressing (selling) puts pressure on valuations.

Malvin Spooner is a veteran money manager, former CEO of award-winning investment fund management boutique he founded. He authored A Maverick Investor's Guidebook which blends his experience touring across the heartland in the United States with valuable investing tips and stories. He has been quoted and published for many years in business journals, newspapers and has been featured on many television programs over his career. An avid motorcycle enthusiast, and known across Canada as a part-time musician performing rock ‘n’ roll for charity, Mal is known for his candour and non-traditional (‘maverick’) thinking when discussing financial markets. His previous book published by Insomniac Press — Resources Rock: How to Invest in the Next Global Boom in Natural Resources which he authored with Pamela Clark — predicted the resources boom back in early 2004.
View all posts by Mal Spooner →
This entry was posted in Random Thoughts and tagged bubble, china, claims, cliff, easy, economy, election, elections, europe, events, financial, fiscal, growth, initial jobless, investors, layoff, layoffs, malvin, malvinspooner, markets, mass, maverick, maverickinvestors.com, monetary, policy, spooner, stock, unemployment. Bookmark the permalink.

2 Responses to U.S. Employment: It’s getting better all the time!