Caution in Fast & Furious Markets? NOT!

Being overly cautious because of newspaper headlines is a costly business, as I discuss at length in my very entertaining book and in several past commentaries.  The following is a recent quote from the Financial Post in Canada but there are hundreds just like it in research reports and the press right now.

“Be cautious despite signs of a rally: Global stock markets have been on fire lately, rebounding strongly off their May lows. Perhaps they’ve caught Olympic fever. But before investors think they’ve missed something and start buying, it’s worth stepping back to take a broader look at the underlying motivation driving the current rally as well as some of the near-term risks.”

This sort of strategic advice is rampant when the analyst, strategist, portfolio manager or reporter has been wrong and just refuses to accept it.  It is extremely difficult to separate emotions from reason when making decisions, and even those who believe they are trained to know the difference don’t necessarily make decisions as if they knew.

Unfortunately, being in ‘denial’ usually results in the investor ending up even more wrong.  This is a heady subject for students of behavioural finance, but for the rest of us, with 10-year Treasury bonds yielding only 1.6%, missing the opportunity to make any real money is hardly what I’d call being cautious.

To put things into perspective, since June 1st the S&P500 has managed to climb from 1278.04 to 1403.76 (yesterday when I looked it up) or +9.8% in a little over a month.  It would take years (five or six) to make this much in the Treasury bond if nothing changed.  Imagine how long it will take to make nearly 10% on your original investment with an annualized yield of 0.14% in shorter-term 6-month U.S. Treasury Bills?  Pretty much a lifetime.  Of course it is quite likely over that long a period of time things will change. Have a look at an older commentary Is the end near? For yield it just might be! 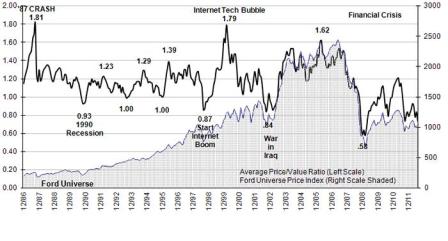 For what it’s worth, I’ll repeat myself yet again and suggest that equity markets can climb another 20% to 30% to achieve fair value, driven by continued strength in corporate earnings.  After that, there’s a strong likelihood they will once again begin to trade above fair value by a significant margin.

Conundrum:  Why are analysts reducing projected earnings at the same time that corporations are reporting better-than-expected earnings?  Read my book.  Downward forecast revisions are emotionally driven (top-down strategists biased by past macro data put pressure on the research department to lower the economic outlook and analysts must oblige or get fired) and always lag the real world.

Can you use this sort of maverick thinking on the payroll?  Then watch the following and act on it!  CHEERS!

Malvin Spooner is a veteran money manager, former CEO of award-winning investment fund management boutique he founded. He authored A Maverick Investor's Guidebook which blends his experience touring across the heartland in the United States with valuable investing tips and stories. He has been quoted and published for many years in business journals, newspapers and has been featured on many television programs over his career. An avid motorcycle enthusiast, and known across Canada as a part-time musician performing rock ‘n’ roll for charity, Mal is known for his candour and non-traditional (‘maverick’) thinking when discussing financial markets. His previous book published by Insomniac Press — Resources Rock: How to Invest in the Next Global Boom in Natural Resources which he authored with Pamela Clark — predicted the resources boom back in early 2004.
View all posts by Mal Spooner →
This entry was posted in Random Thoughts and tagged 500, behavior, behaviourial, caution, interest, investors, mal, malvin, market, markets, maverick, maverickinvestors.com, rates, s&p, S&P500, sciences, spooner, stock, treasuries, yield. Bookmark the permalink.

1 Response to Caution in Fast & Furious Markets? NOT!