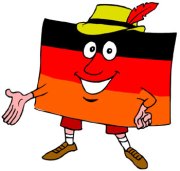 I’d like to revisit a recurring phenomenon – and a reliable contrarian indicator – that befuddles the logical mind yet regularly creates investment opportunities. I’m inspired (again) by this comment I received from a fellow investment professional:

“I have read your blog postings (from the CFA LinkedIn group). I believe you once wrote that new funds are set up by investment firms after what should have been their sell-by date (because that’s when they could sell the new funds to retail investors). Thought you might enjoy today’s article on PIMCO (below) and its new BUND ETF.” from Alicia Romo of Los Angeles.

She’s referring to a blog I did on February 22nd, entitled GOLD? How to avoid BAD timing! and why the sudden introduction of new funds – gold ETF’s or mutual funds at that particular time – are always introduced when the asset or sector should be sold. A few months later (May 16th) I provided a follow-up entitled How I predicted the decline in GOLD price!

There’s a big difference between predicting and ‘expecting’ which I deal with in my book. Despite the title of that commentary, I wasn’t really predicting a decline in the price of gold but rather was expecting the price to decline – because fund companies launch products that will sell, and retail investors only want to buy assets or sectors that have already performed well (have measurably dished out more than their fair share of ‘alpha’). Technical analysts might disagree, but experience teaches one that there’s a strong probability that what has already performed well is likely to be disappointing very soon.

An excerpt from the article that Alicia is referring to follows:

By Keith Jenkins and Paul Dobson July 2 (Bloomberg) — Pacific Investment Management Co. started an exchange-traded fund for German government bonds, after co-chief investment officer Bill Gross last month warned the nation’s securities were in a bubble. Gross, who runs the world’s biggest bond fund at Pimco in Newport Beach, California, said in an interview on Bloomberg Television that Germany was “not an attractive market” as the country was saddled with rising liabilities from Europe’s debt crisis. He said then that he favored U.S. and U.K. securities as the “cleanest dirty shirts” for bond investors.

In other words, even though the guru investment strategist at Pimco doesn’t like the prospects for German bonds (bunds) the company knows that a German bund ETF will sell. Why? The following is from the same article:

The yield on German 10-year bunds, the euro-region’s benchmark sovereign securities, dropped to a record 1.127 percent on June 1, from as high as 3.51 percent in April last year.

Most folks don’t even know that bond prices move up and down, but they sure do. To keep it as simple as possible: 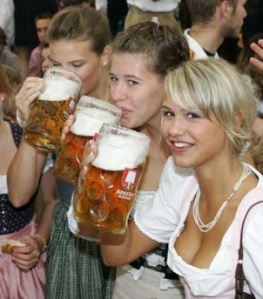 Imagine a ten year security that pays an annual coupon of 1.75%. If you paid $1000 for one, you’d get $17.50 each year and your $1000 back after ten years. Let’s assume that you could get 3.5% in general using other relatively safe investments. This security would then only be worth about $860. Why? If you paid only $860 then you’d get a 3.5% return which is fair and comparable to your other options.

Now, if all your other options suddenly became too risky (it seems unlikely you’ll get the 3.5% annual return and you might not even get the final $1000 payment; because the issuer of the security may go bankrupt) then you just might settle for a ‘safe’ rate of return of 1.13%. In this case, the security would be worth more to you….$1,060 actually (it’s just math). 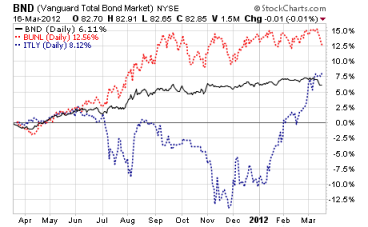 What the above quote says (indirectly) is that over the course of 14 months owners of German bunds (red line in the graph or BUNL is an index of bunds) watched their value go HIGHER – just like my made-up security in our example went from roughly $860 to $1060 or UP 23% – by early June of this year; a time period when bank deposits and even government money market securities returned ZIPPO, and almost every other investment option (stocks for example) seem to have been losing people money for years. Hmmmmmmmmm.

What happens next? Too many investors own those German bunds, and all of a sudden they just don’t want to own them anymore.

Have German bunds evolved from a fun party with a manageable crowd into a mob? Are there just too many party-goers at the same party? What if they panic for whatever reason and all of them try desperately to get out the one exit (sell) at the same time?

This brief video shows a party gathering momentum…..the annual pilgrimage of motorcycle enthusiasts to the hamlet of Port Dover, Ontario (Canada) every Friday the 13th. I filmed this video at 9:00AM on Friday July 13th, 2012. Early in the morning and there was already a lineup for miles along the main road towards town – thousands of bikers anxious to join the party. When 9:00PM comes along, an estimated 100,000 motorcycles will be crawling (if moving at all) along that same road for miles trying to get out – like a German bund fight.

Malvin Spooner is a veteran money manager, former CEO of award-winning investment fund management boutique he founded. He authored A Maverick Investor's Guidebook which blends his experience touring across the heartland in the United States with valuable investing tips and stories. He has been quoted and published for many years in business journals, newspapers and has been featured on many television programs over his career. An avid motorcycle enthusiast, and known across Canada as a part-time musician performing rock ‘n’ roll for charity, Mal is known for his candour and non-traditional (‘maverick’) thinking when discussing financial markets. His previous book published by Insomniac Press — Resources Rock: How to Invest in the Next Global Boom in Natural Resources which he authored with Pamela Clark — predicted the resources boom back in early 2004.
View all posts by Mal Spooner →
This entry was posted in Random Thoughts and tagged asset, bank, bill gross, bonds, bubble, bund, bunds, cfa, companies, coupon, crisis, debt, decline, deposits, dover, EFT, europe's, expecting, friday the 13th, fund, German, gold, government, indicator, interest, investment, investors, linkedin, malvin, markets, maverick, maverickinvestors.com, opportunities, options, pimco, port, predicted, price, rate, rates, return, sector, securities, spooner, technical, timing, U.K., US$, yield. Bookmark the permalink.