Out with the Treasuries, in with Corporates!!!

Is it time to gravitate towards U.S. corporate bonds and get out from the behind the sanctuary of treasuries?

Many argue that the recent drift upwards of the benchmark 10-year treasury yield is a blip. Others believe that it is a reflection of an imminent inflation threat – rising unit labour costs a harbinger of things to come.

Rising rates for “safe haven” treasuries should hardly be a surprise, nor is it bearish. As I mentioned in my commentary Fund Flows Point to continued strength in global equity markets! it only makes sense that institutional investors sell treasuries for equities…and no doubt the case can be made that the spread available from corporates (even bank bonds) warrants attention. If you didn’t see this coming, and position for it accordingly – see many of my prior postings going back a year – then you might be brain dead.

The credit default swap widens when investors seek the perceived safety of government securities and narrows when they favor assets such as corporate bonds. 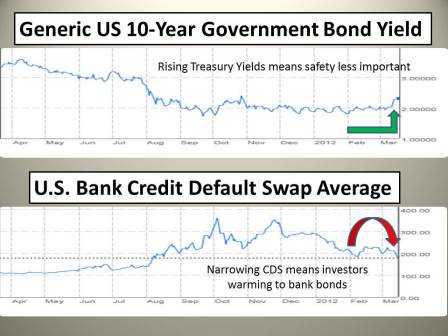 A shift into corporates doesn’t necessarily mean that corporate bond prices will rise…..it depends on many variables. But for those who MUST own bonds (insurance companies, banks) for asset-liability matching, annuities and such these securities should perform BETTER than treasuries. Relative performance matters a great deal to institutional fund managers.

Be wary of those already anticipating a May selloff in stocks, and of course the poor folks who ignored the strong data and market momentum for months on end refusing to believe that financial markets weren’t still in a tailspin. I watched an interview this morning of just such a fellow: “Investors should sell their stocks!” he recommended. It is likely that money manager neglected to anticipate the rally in stocks (or never topped up) and would feel better if we all joined him.

Malvin Spooner is a veteran money manager, former CEO of award-winning investment fund management boutique he founded. He authored A Maverick Investor's Guidebook which blends his experience touring across the heartland in the United States with valuable investing tips and stories. He has been quoted and published for many years in business journals, newspapers and has been featured on many television programs over his career. An avid motorcycle enthusiast, and known across Canada as a part-time musician performing rock ‘n’ roll for charity, Mal is known for his candour and non-traditional (‘maverick’) thinking when discussing financial markets. His previous book published by Insomniac Press — Resources Rock: How to Invest in the Next Global Boom in Natural Resources which he authored with Pamela Clark — predicted the resources boom back in early 2004.
View all posts by Mal Spooner →
This entry was posted in Random Thoughts and tagged annuities, asset, bank, banks, bonds, corporate, credit, default, equity, flows, fund, global, inflation, insurance, liability, management, market, prices, rally, spreads, stocks, swap, treasuries, U.S.$, US$, yield, yields. Bookmark the permalink.