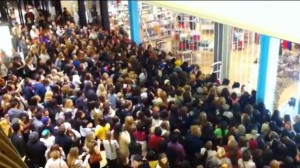 Are these folks shopping for US Treasuries?

Thirty years ago, when I got my first job as an investment analyst (Canadian Pacific Pension Fund) the bond managers were a sad bunch. Rates had gradually climbed (i.e. bond portfolios kept losing money) for years up to the early 1980’s. I must admit, I never expected to see a bubble develop for bonds….have seen gold bubbles, tech bubbles, and others I can no longer remember. 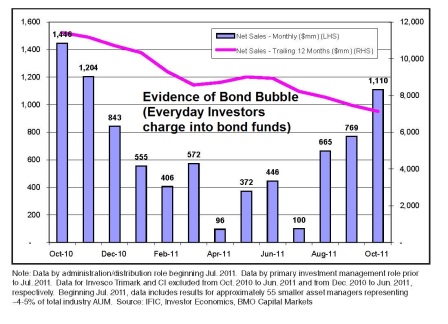 In fact, bond mutual funds (in Canada but no doubt it’s the same everywhere) have been selling like hotcakes. Back in the day, we’d only offer a bond fund (like a money market fund) for the odd investor that wanted some diversification – but we sure wouldn’t spend any money advertising it. In those days it was all about equity funds……stocks generated better returns and better fees.

For the past couple of years, stocks have been avoided like the plague. Sure, bond fund net sales trended down in the springtime (of 2011) somewhat, as investors realized they were missing a non-trivial rebound in stocks (primarily resources, gold, oil), but they still went for balanced funds (that hold at least some bonds) rather than pure equity funds. The following quote from a research report (by BMO analyst John Reucassel) suggests the frenzy for bonds continues. 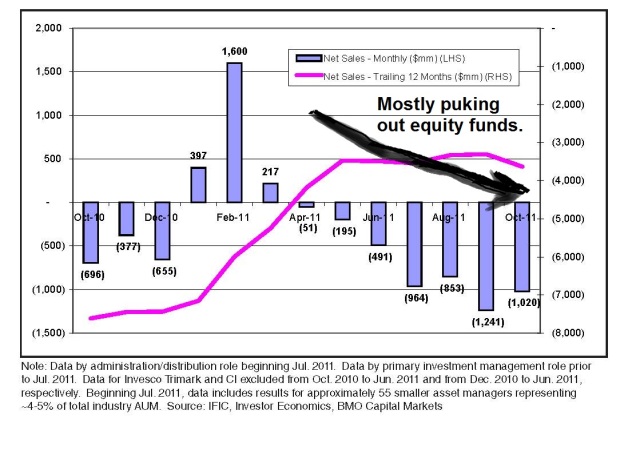 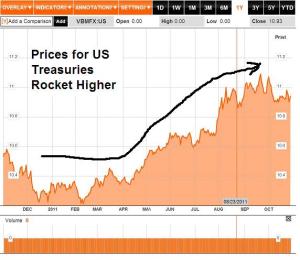 “Where the money flows, so the bubble grows” I say (make sure you credit me with this gem if you repeat it by golly). The prices of US Treasury bonds have risen as a result of this surge in demand (governments buy them, foreigners buy them, everyone wants some) to the point where the real rate of return (interest rate less inflation rate) is ZIP! And people still want them? This is what I call a bubble.

Today, the global credit crisis has caused a Treasury bond bubble. Overwhelming demand for Treasury securities from skittish global investors, along with Federal Reserve and foreign Central Bank buying, has lifted prices and pushed yields well-beyond normal. Intermediate- and long-term Treasury yields are at historically low yields, and T-bill yields have actually been negative for a few days since the crisis started. (December 15, 2011 By Rick Ferri in his blog).

Sometimes the job of predicting the future is just too friggin’ easy. Will all this money stay put earning nothing? NOT bloody likely! I pulled this table from Rick Ferri’s blog. He estimates that once the government begins unwinding their massive bond (and mortgage etc.) holdings, there’s risk of a 10% decline in bond prices. BUT – he neglects to factor in the impact of every other investor on the planet doing the same thing at the same time.

To keep it simple, imagine a 2% 10 year bond, that pays $100 at maturity, in a world where interest rates are 2%. What’s it worth? $100 if everything is annual (I said keep it simple). If world interest rates were to return to a “normalized 3.7%” this same security’s worth would fall to $86 These poor bond buyers lose 14% of their money – while hoping to AVOID risk? Now if there’s panic selling, say the effective world interest rate gets to 5%? Now this bond is worth only $77. The bond holders have lost 23% of their savings…..while trying to avoid this same sort of disaster by getting out of those volatile equities in the first place? OUCH!

A useful rule of thumb (quoting from my 5-star rated book, A Maverick Investor’s Guidebook) is:

“Minimum risk occurs when perceived risk is at a maximum.”

As I’ve indicated in more recent postings……ERGO BUY EQUITIES. Stocks are “perceived” as maximum risk, and according to my rule must in reality be the less risky alternative. We humans are prone to intellectual laziness. We will often accept the simplest two-dimensional observation as truth, when many (if not most) issues are multi-dimensional. Learn from this video:

Malvin Spooner is a veteran money manager, former CEO of award-winning investment fund management boutique he founded. He authored A Maverick Investor's Guidebook which blends his experience touring across the heartland in the United States with valuable investing tips and stories. He has been quoted and published for many years in business journals, newspapers and has been featured on many television programs over his career. An avid motorcycle enthusiast, and known across Canada as a part-time musician performing rock ‘n’ roll for charity, Mal is known for his candour and non-traditional (‘maverick’) thinking when discussing financial markets. His previous book published by Insomniac Press — Resources Rock: How to Invest in the Next Global Boom in Natural Resources which he authored with Pamela Clark — predicted the resources boom back in early 2004.
View all posts by Mal Spooner →
This entry was posted in Random Thoughts and tagged annual, bond, bonds, bubble, credit, crisis, diversification, equities, funds, global, gold, guidebook, inflows, interest, intermediate, investors, long-term, mal, malvin, maturity, maverick, money, mutual, net, normalized, portfolios, prices, rate, rates, redemptions, risk, sales, securities, security, spooner, stocks, T-Bills, tech, treasuries, US$, yields. Bookmark the permalink.