Wanna be a Portfolio Manager? Forget the ‘walk’ and learn the ‘talk’!

Portfolio managers become very adept at covering their everyday-idiot side and at a moment’s notice switching on their learned-professional alter ego. Like the Two Face character from Batman comics, it’s often difficult to determine who it is you’re actually talking to.

Take this very recent quote (names changed to protect the pros of course):

As “Herman Munster” became more concerned over the summer with the European sovereign-debt crisis, he and his team began reducing the equity holdings in several income and balanced funds.

It sounds so sensible in PM-speak doesn’t it? But what would it mean in everyday english?

Translation: ‘We got skittish during the summer months (which probably was August) and like every retail investor-mope, sold stocks as close to the bottom as possible.’

Admittedly it is quite possible the money went into the bond market (would have been a wise move) since bonds were doing quite well at the time, but in all likelihood “concern” over the European “sovereign-debt-crisis” would have steered the money into cash.

How does one know this lingo is perfect (i.e. has no informational content?).

Between March and June the S&P 500 skidded down almost 5%, depending on the exact dates. So if 10% of equities (assume he means 10% of the total fund, but one has to admire the ambiguity – could be 10% of just the stock portion) were sold, and then the market took them down another 5% (between April and June) then how could the weight be 50%?

It gets better – during August alone the value of the stocks dropped another 10% (at least)? Seems to me that immediately prior to the recent rally, the weighting in stocks for the balanced fund must be more like 60% minus the 10% that was sold; minus another 2.5% (50% of -5% in June) minus another 5% (50% of -10% in August) = total weight in stocks something much closer to 42.5%. Since bonds climbed about 7% during the summer months, my extremely crude arithmetic would put his true weighting in stocks likely 20% below “normal” just before those same stocks would rocket UP 12% in the one month of October. 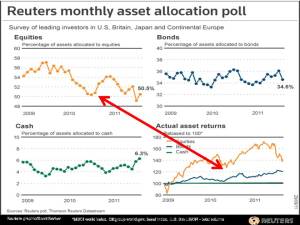 I first used this (added the arrows myself) chart in an earlier blog to illustrate that in general, professional fund managers – I am one of them, but then again I like to think I’m an enigma – are usually dead wrong. They’ll reduce their commitment to a down-and-under asset class just when it’s about to outperform.

So what are we hearing nowadays from professional money managers?

Translation for ‘cautiously optimistic’? We’ve been as dumbfounded as everyone else, and have been sitting on our hands for months on end. We will wait until the market has really rallied before commiting any dollars. Of course, once we’ve bought back in the unsuspecting client will believe we had a generous weighting in stocks the whole time.

Portfolio managers will also be selective about what data to regurgitate – so it can be presented in a way that supports their position.

It will sound oh so sensible no matter how much it defies logic. I’ve mentioned a few times in previous rants how consumer confidence is a co-incident indicator (not predictive). If a manager is bearish, he or she will quickly remind a client that consumer confidence is low (we’re cautiously pessimistic?). As I’ve said in the past, how can consumer behaviour improve (begin gathering good and positive momentum) if it isn’t at first very low? Surprise!

Consumer spending rose 0.6% (in September) versus 0.2% in August. The Michigan survey of consumer confidence (October) was 60.9 versus 59.4 in September and the 58 expected.

While now underweighted equities because of low consumer confidence, in several months time I predict that PM’s will sound ever so convincing when they are suddenly overweighted equities (having paid much higher prices for stocks that they could have bought in August and September) because of stronger consumer confidence confirming a better outlook. And their clients will eat it up.

The key to becoming a successful portfolio manager (as opposed to being a competent money manager) is learning how to use language to one’s advantage – you must become like teflon – poor strategic decisions don’t stick to you.

The following chart is to help you practice your PM-speak.

Malvin Spooner is a veteran money manager, former CEO of award-winning investment fund management boutique he founded. He authored A Maverick Investor's Guidebook which blends his experience touring across the heartland in the United States with valuable investing tips and stories. He has been quoted and published for many years in business journals, newspapers and has been featured on many television programs over his career. An avid motorcycle enthusiast, and known across Canada as a part-time musician performing rock ‘n’ roll for charity, Mal is known for his candour and non-traditional (‘maverick’) thinking when discussing financial markets. His previous book published by Insomniac Press — Resources Rock: How to Invest in the Next Global Boom in Natural Resources which he authored with Pamela Clark — predicted the resources boom back in early 2004.
View all posts by Mal Spooner →
This entry was posted in Random Thoughts and tagged blog, bonds, bottom, buy, cautiously, cfa, consumer confidence, investments, investors, lingo, mal, manager, managers, market, maverick, money, optimistic, portfolio, professional, S&P500, sell, spooner. Bookmark the permalink.

1 Response to Wanna be a Portfolio Manager? Forget the ‘walk’ and learn the ‘talk’!