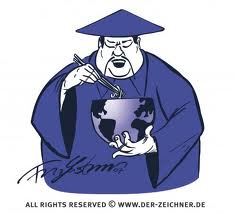 Tired of headlines warning that slowing growth in China’s economy will be devastating for markets and the global economy?  Me too!  So I put a (very) little effort into trying to keep some perspective on occasion.  Although data from 30 years ago (a long time for a youngster, but if you’re 50+ years old it’s a flash-in-the-pan) is hard to precisely estimate for China (currency translation is a big issue) I came across a valiant effort in an obscure study by the Center for International Research,  U.S.Bureau of the Census (published March, 1991):

Our benchmark dollar GNP estimate for China in 1981 is 418 billion, which is $68 billion higher than previously estimated by the World Bank, and $138 billion higher than obtained from a simple exchange-rate conversion of China’s national accounts. For 1989, we estimate China’s GNP to total $868 billion in 1981 dollars.

So, between 1981 and 1989 the Chinese economy grew at a spectacular rate of roughly 9.5% per year.  Not shabby!  Now commit to memory that if its economy were to grow 10% (keep it simple) then in just the one year from 1989 to 1990 the world would enjoy an additional $86.8 BILLION of wealth (TV’s, copper consumption, bicycle sales….etc.)  Don’t shoot me if I miss a decimal placement….I’m not accustomed to toying with such big numbers.

“China has released its first official estimate of GDP in 2010 – 39.8 trillion yuan (National Bureau of Statistics of China, 2011). No official exchange rate for conversion of this annual GDP to dollars was published, but utilising a simple unweighted daily average for 2010 yields a figure of $5.9 trillion – the final data will not differ greatly from this.”  John Ross, visiting Professor at Antai College of Economics and Management, Jiao Tong University, Shanghai said this in his blog earlier this year.

Let’s assume China’s growth rate were to deteriorate to a paltry 5%.  That would mean a boost to the global economy of only $293 BILLION.  That’s like adding another Hungary plus Algeria to the world economy.

Malvin Spooner is a veteran money manager, former CEO of award-winning investment fund management boutique he founded. He authored A Maverick Investor's Guidebook which blends his experience touring across the heartland in the United States with valuable investing tips and stories. He has been quoted and published for many years in business journals, newspapers and has been featured on many television programs over his career. An avid motorcycle enthusiast, and known across Canada as a part-time musician performing rock ‘n’ roll for charity, Mal is known for his candour and non-traditional (‘maverick’) thinking when discussing financial markets. His previous book published by Insomniac Press — Resources Rock: How to Invest in the Next Global Boom in Natural Resources which he authored with Pamela Clark — predicted the resources boom back in early 2004.
View all posts by Mal Spooner →
This entry was posted in Random Thoughts and tagged accounts, china, currency, economic, economy, GDP, global, gnp, growth, investors, mal, maverick, national, slows, spooner, translation, yuan. Bookmark the permalink.