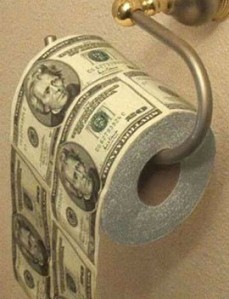 Banks are in the news. The stocks are sucking wind, and massive layoffs continue unabated (recall in one of my earlier postings that that jobs relating to ‘financial activity’ have been declining rapidly in America). And it’s clearly a global phenomenon evidenced by these headlines:

Barclays (BCS-N14.35-0.21-1.44%) will cut about 3,000 jobs this year as the industry grapples with tougher regulation and the impact of a spreading sovereign debt crisis on investment banking operations.

The real issue, missed by many analysts and the press, is that for the time being it doesn’t make a whole lot of sense for banks to do any banking. A friend of mine just told me he was golfing with a fellow who used to be in the auto parts business (sourcing much of his supply from China). Recently, his bank explained they no longer wanted to be in that sort of business, and pulled his bank lines. Solvency wasn’t the issue, and the loans were collateralized by a substantially large chunk of real estate…..they just didn’t want the business anymore.

What’s really going on? U.S. banks don’t need to make loans when they can take deposits (or issue short term low – in fact almost NO – interest paying notes) and invest the proceeds in Treasuries guaranteed by the government. Earning the spread is lucrative enough, so why take on risk? Analysts point out that bank earnings have been good because they are not writing off as many bad loans as they did in the recent past. This is true, but is a symptom not the cause. There are fewer bad loans if you don’t make any loans. 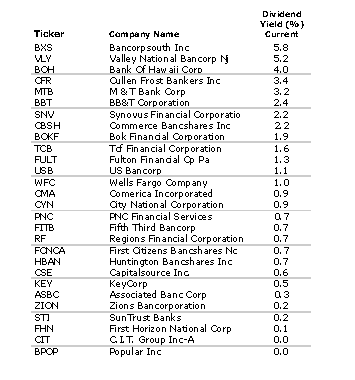 But why are the stocks so shabby? If the banks continue to simply play the spread game, then earnings will be tediously reliable. How can they make earnings grow? Cut costs of course! However, the multiple an investor would pay for this type of growth/strategy is not very generous. Furthermore, with the exception of a few troubled banks the current dividend yields are hardly dazzling (see exhibit I borrowed from my Reuters screen). Other institutional investors have discovered that they can also buy Treasuries, so why own banks stocks that own Treasuries? Who needs the middleman?

The re-destribution of wealth and capital deployment ignited by the financial crisis is far from over. Until the banks begin banking again, stocks in sectors that have reasonable balance sheets (banks wouldn’t lend to them before 2008 – they were too busy inventing mortgage-backed securities, swaps, synthetic securities etc.) and earnings leveraged to the recovery are the place to be – consider my previous commentary “U.S. Stocks show promise.” There was a table listing the best performing 50 U.S. stocks. Below is a stock chart (I actually did pick this randomly) for Celanese Corp. – hardly sexy by today’s standards: 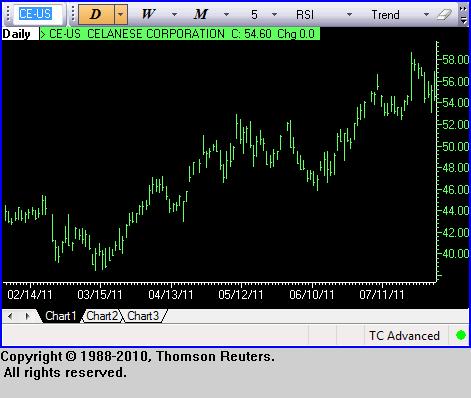 For those following my blog, you’ll recall I started pounding the table about a rally in a broad spectrum of Main Street American stocks back in 2010, but then it was “pending.” Now it’s fully underway with occasional disruptions. Volatility is now the norm.

These companies and industries have waited an awful long time to experience a modest improvement in prosperity. They did not participate at all in the pre-crisis boom enoyed by financial services businesses, and on the contrary struggled while commodity prices kept rising as Asian demand (and speculative excess) blindsided the markets for raw materials. 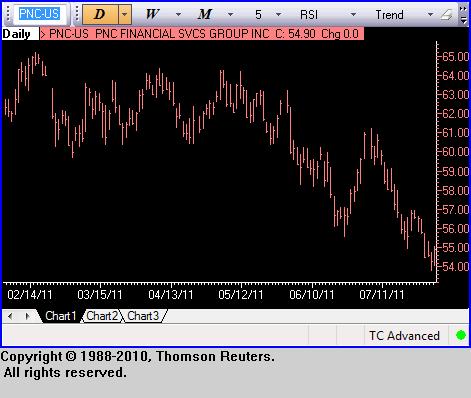 In contrast, here is a chart for PNC Financial.

It is convenient to blame this downward trend on a combination of: 1) issues in Europe and 2) the so-called (I said it was a Red Herring, and it is) U.S. debt crisis.

If only analysis were as simple as the headlines make it out to be, but in reality what’s occuring is a massive shift in the fortunes – partly caused by these crises, but mostly due to evolving fundamentals – between countries and industries as the global economy strives to manage its way to a sustainable recovery. 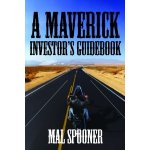 BUY ME at iBooks for your iPad

Malvin Spooner is a veteran money manager, former CEO of award-winning investment fund management boutique he founded. He authored A Maverick Investor's Guidebook which blends his experience touring across the heartland in the United States with valuable investing tips and stories. He has been quoted and published for many years in business journals, newspapers and has been featured on many television programs over his career. An avid motorcycle enthusiast, and known across Canada as a part-time musician performing rock ‘n’ roll for charity, Mal is known for his candour and non-traditional (‘maverick’) thinking when discussing financial markets. His previous book published by Insomniac Press — Resources Rock: How to Invest in the Next Global Boom in Natural Resources which he authored with Pamela Clark — predicted the resources boom back in early 2004.
View all posts by Mal Spooner →
This entry was posted in Random Thoughts and tagged banks, barclays, capital, celanese, crisis, debt, deposits, dividend, earnings, economy, financial, global, hsbc, jobs, layoffs, reuters, sectors, short, sovereign, spread, stocks, term, treasuries, wealth, yield, yields. Bookmark the permalink.