Vancouver’s loss – an omen for Canada?

Vancouver’s loss to Boston for the coveted Stanley Cup may prove to be a turning point in the fortunes of Canada – our dollar and economy.  Coming out of the financial crisis less battered than many other countries, and enjoying a rapid recovery in our markets fueled by the rebound in commodity prices (oil, metals, gold etc.) and top it off with a majority conservative government – all in combination spells hubris; which denotes overconfident pride and arrogance.

History isn’t much of a guide to what lies ahead, but it is interesting that the boost in capital spending (corporate) I foretold seems to be in evidence.  Consider this quote concerning recently released stats about U.S Industrial Production.

“Outside of autos, by market group, consumer goods slipped 0.1%, the first slide since February. Although autos, again, played a starring role, food & tobacco was the other notable decliner. But computers, video and audio equipment, appliances and furniture, as well as clothing, managed to increase in the month.  Production of business equipment rose 1.3%, snapping two straight months of declines. And that was spread out, with gains showing up in information processing as well as industrial equipment. So good news for business spending and productivity.”

It’s a mixed bag for sure, but reading between the lines perhaps consumers and businesses are simply adjusting to what’s happened in relative pricing.  Autos have been impacted by Japan – when I asked the service manager at my Nissan dealer if there ‘was’ an impact, he said the shortages are being felt more ‘now’ than before.  It’s interesting that high oil prices have altered the economics of manufacturing Nissan’s new eco vehicle (testimony to the fact that many so-called energy saving initiatives actually use MORE energy to manufacture).

“Motor vehicles and parts fell for the second consecutive month, although the
1.4% drop was more mild than April’s 6.5% dive.”

My own theory is that consumers in the United States are behaving as they should be.  Government efforts have been skewed towards rescuing the financial sector, and taxpayers in the U.S. will have to pay for it.  The only way this can happen is if consumers cut back spending and borrowing and gradually increase savings – savings needs to replace government debt.  The following graph illustrates that is what Americans have been doing. 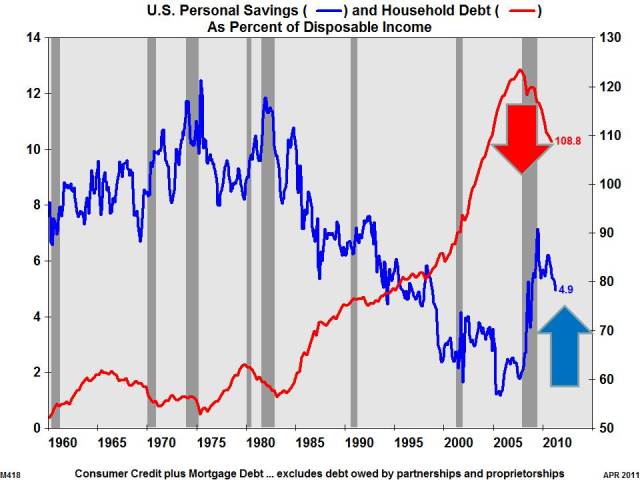 US Consumer is playing ball!

Unfortunately, it has been the sector that was most abused that continues to suffer most while consumers scramble to get their financial “house” in order.

“U.S. homebuilder confidence took a turn for the worse. The NAHB Housing Index fell 3 pts in June to 13, not expected (no change was expected), and the lowest since last August and September. [To put this in perspective, a number over 50 means more builders view sales conditions as good versus poor. We haven’t seen a 50’ish reading since early 2006.]”

The conundrum faced by Bernanke and Washington is that money NOT being spent on housing is influencing demand and pricing in other areas.  It isn’t really inflation is the conventional sense (not yet in my opinion anyway), but more dollars demanding goods that are in short supply.  While interest rates are deliberately kept down low to supposedly help the housing sector recover (not to mention keep federal interest payments on government debt down too) there is now a dilemma:  Rising prices for things Americans need (clothes, food) will require a return on their increasing savings – or they’ll just stop saving.  Right now, the net return on savings is (bond yield) –  (inflation rate) = ZIP?

“U.S. CPI inflation rose more than expected in May to a 2½-year high of 3.6%, despite a pullback in gasoline prices, amid continued gains in food costs and outsized increases in several other areas…. The monthly gain in the core was led by the largest jump (1.2%) in clothing prices in more than two years and the fourth consecutive spike in motor vehicle prices (1.0%, partly attributed to temporary shortages due to supply-chain disruptions). Other areas showing sizeable increases were education, recreation (after two flat months) and hotel rates (amid strength in tourism thanks to the weak dollar).”

Canadians (arrogance, pride) have been reluctant to make any adjustments – hence today’s headline in the Globe & Mail’s Report on Business:  “Carney warns on housing markets. Bank of Canada chief says there’s a risk ‘fear and greed’ are driving real estate prices to unsustainable levels.”  Canadians have continued to borrow, and savings remain at record low levels.

Everyone seems surprised that (as I also anticipated….NOT predicted) the US$ has firmed up.  There are all sorts of explanations emanating from the talking heads out there…safe haven or whatever, but it seems to me that unless consumers in other countries refuse to follow the lead of American consumers and rebalance their spending/saving behaviour, the US dollar will strengthen simply because it will be a better place to invest.

Malvin Spooner is a veteran money manager, former CEO of award-winning investment fund management boutique he founded. He authored A Maverick Investor's Guidebook which blends his experience touring across the heartland in the United States with valuable investing tips and stories. He has been quoted and published for many years in business journals, newspapers and has been featured on many television programs over his career. An avid motorcycle enthusiast, and known across Canada as a part-time musician performing rock ‘n’ roll for charity, Mal is known for his candour and non-traditional (‘maverick’) thinking when discussing financial markets. His previous book published by Insomniac Press — Resources Rock: How to Invest in the Next Global Boom in Natural Resources which he authored with Pamela Clark — predicted the resources boom back in early 2004.
View all posts by Mal Spooner →
This entry was posted in Random Thoughts and tagged autos, bernanke, boston, bruins, canada, canucks, capital, clothing, computers, conservative, currency, debt, dollar, energy, estate, fed, food, gold, government, household, housing, industrial, inflation, metals, oil, price, production, real, savings, spending, States, U.S.United, vancouver. Bookmark the permalink.