Is Linkedin (IPO) really tuned in? Is there a tech disconnect?

LinkedIn Corp’s <LNKD.N> shares more than doubled on their first day of trade last
month. The hype seems to have worn off some since the IPO.  There are some cynics who figure that it was just a big one-off shenanigan – nostalgia for the dot.com days when IPO’s would rocket higher on the day of issue, but then rapidly peter out.  Reminds me of a story I told while speaking at the Alternative Investments Conference last week in Calgary – an associate and I went to Rodney’s Oyster Bar in Toronto back in the year 2000 and noticed the oyster shuckers were taking turns running into the back room – in order to place trades in tech stocks using the only telephone.  We both sold all our tech stocks after that experience (thank goodness).  This is just one anecdote evidencing a bubble in the works – there are many more I cover in my book “A Maverick Investor’s Guidbook.”   There’s nothing wrong with playing this game as long as you realize the odds aren’t disimilar to playing the lottery.  Although I’ve participated in hundreds of ‘hot’ IPO’s over my 30 years as a money manager, only one stands out as a true blockbuster and it was just blind luck I managed to participate.  Here’s an excerpt from my book about Andover.Net which was the company going public at the time.  It had created a networking portal that geeks could use to readily share linux-based programs they’d developed.

“It wasn’t a really huge stock issue, and the firm I worked for managed lots of money, so I went big. I got a generous “fill,” which means way more shares were allocated to my funds than a portfolio manager in faraway Canada should have expected. The stock price I paid on December 8, 1999, was US$18, and it rocketed up 252% that same day to close above US$63. The funds I managed all became the top performing mutual funds in Canada that year primarily because of this one windfall.”

I’ve mentioned for months (and even in my most recent posting) that it just makes sense that tech and telecom stocks, while off the grid in terms of investor attention, would be performing well and indeed they have been.  So far this year, technology-related IPOs debuting in the United States have risen an average of 23.4 percent on their debut according to Ipreo (a leading global provider of market intelligence and investor tools).

You really can’t expect to meaningfully partipate in these deals (and only the most connected and ‘monster’ institutional clients can expect to participate at all), but if you do believe some have money-making potential as businesses, then keep an eye on the stock after-the-fact.  Here’s Linkedin’s stock chart of late:

Once the dust settles, the valuation of Linkedin will begin to reflect it’s ‘fair’ value given the uncertainty associated with the company.  The most obvious uncertainty at this stage is:  What is Linkedin Anyway?

For a journalist, or an observer or an investment analyst this is no easy question.  Some view it as a career networking tool.  I figure it’s much less than that now, but potentially much more.  Why less?  In my most humble opinion, I personally have a profile that is both 100% complete and way cool indeed.  However there’s been no flurry of job offers over the past 6 to 8 months – although my profile clearly suggests I should be running a wealth management division, or have the CEO job of an asset managment company at the very least be hired as a portfolio manager for a huge investment fund.  By now I should also be writing a column for a prestigious business or motorcycle magazine, or have my own TV show (hope you’re laughing cause I sure am)……in fact I haven’t even had one inquiry.  If it isn’t really going to get you a job, then what’s it for?

I have managed to re-connect with dozens of folks I’d like to keep in touch with – not in touch like I would on “Facebook” because there’s a difference between everyday friends and business friends and acquaintances.  Linkedin is also a novel way to ‘associate’ yourself with others.  I’ve joined groups ranging from my fellow Chartered Financial Analysts to Harley-Davidson enthusiast groups.   So I suppose Linkedin is a social networking tool of sorts.  Like Facebook, it must be worth  something, but it’s true value will depend on the ingenuity of management to evolve it into something really special.  Even so, it definitely won’t be a cakewalk.  After all, look at the volatile chart for Google.

Google has grown into something much more powerful than the simple search engine that was its genesis.  Its stock price chart, like most companies in new millenium industies, is a roller coaster.  Determining economic valuation (as opposed to social) is difficult since our understanding of the sources of revenues and consumer loyalties contains so many assumptions, compared to a steel company or retail clothing chain where analysts have been studying their business models and finances for decades.

Linkedin could easily grow into something much more than a home for your electronic resume – but it must use the proceeds and its currency (publicly traded shares) to fuel spontaneous and continuous innovation.  It can’t be all about advertising, although the dollars once earned by the “Mad Men” of the ad industry are flowing into digital media like ants to ice cream dropped by a toddler on the ground.  Like many portfolio manager types, I like to try products.  I was experimenting with Corel Draw and Pagemaker back when the editors at the Financial Post (when it was a weekly business paper in Canada) were still pinning articles and hand crafted ads to bristol boards.  I spent $500 and got about 80 click-throughs to this blog – and the ‘rate’ was a generous 3.3% (number of clicks on the ad as a percent of the number of times the ad appeared).  Is it worth it?  I suppose it depends on the advertiser, but in my opinion NOT for me.  A click doesn’t translate into a new subscriber or a sale if I’d something to sell.  I also found the process a bit confusing…bidding a price (blindly) and then hoping the ad appears enough to have some impact.

Making the ads and “upgrades’ much easier to understand and a whole lot cheaper (pennies for hundreds of click-throughs) will allow the company to generate much more revenues (Price X Volume).  If you remember Economics 101 – the objective is to earn as much of the total area under the demand curve as possible (sorry about that).

Allowing businesses and industries more flexibility to search for, join and be introduced via  “Groups” might pay off handsomely in the long run.  Portals exist already for many larger industries and businesses, but Linkedin could conceivably become the “go-to” network for the thousands of smaller ones that don’t yet have an online ‘business’ networking facility.  All of this sounds pretty wishy-washy right?  Hence the volatility inherent in these stocks – sexy possibilities in a constant push-and-pull battle with the practicality of profits & losses.

There are cynics out there.  Consider the following article that was published in the New York Daily News: 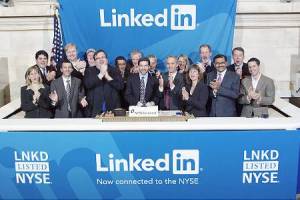 LinkedIn’s stock closes with high gains on first day, which doesn’t bode well for its future

While LinkedIn may be a fine company, I am not buying at these prices, because history does not augur well for U.S. companies that soar on the first day of trading.

Akamai’s stock has now rebounded to $34.20. But if you were lucky enough to have bought it on the IPO, you have barely eked out a profit in 12 years and if you bought it the first day, you are down about 76%.

I disagree with this journalist’s perspective for two important reasons:

1) Linkedin and other tech IPO’s this year were NOT completed in a technology bubble (of irrational exhuberance proportions) like the others he’s cited as comparables, and although we’re not precisely sure what kind of business Linkedin will ultimately choose to grow into, there’s no question that it already has the makings of a real business.  Much of the IPO’s that came to market during the bubble were ideas (some might say scams) and not businesses.

2) Markets broadly suffered a delayed reaction to the Japan (and maybe European) induced disruptions to economic activity and growth (see previous postings on this blog).  The cooling of Linkedin’s (and perhaps Google’s as well) hotness might just prove to be a short term phenomenon.

Here’s an interesting question:  Is Linkedin using Linkedin to recruit employees?  I’m sitting by the phone……and I’ll let you know if they call.

In the meantime, enjoy this clip of George Costanza (Seinfeld) comtemplating his job options.  One of my favourites.