MARKET CORRECTION — The day after you buy stocks!

FORECAST – Sunny with Chance of Showers

I was asked to speak at the Alternative Investment Conference in Calgary over the weekend. As you know, I don’t believe in predictions (for reasons covered at length in my new book); I DO believe there is merit in anticipating (rather than predicting or forecasting) the inevitable.

Back on March 8th, I was bullish the $US like never before (see old postings). And I saw this on Bloomberg this morning:

Bloomberg May 31st: Confidence in the outlook for the nations sharing the euro fell to a seven-month low and U.S. consumer spending rose by less than economists forecast in April, reports showed on May 27. The Dollar Index, which tracks the greenback against the currencies of six major trading partners, has increased 2.7 percent this month.

Back on Feb 10th, I suggested that market leadership would begin to shift out of early cyclical plays as there had to occur productivity related capital spending. The spending manifests itself in the technology and telecommunications sectors – where cutbacks were necessary during recessionary times causing legacy systems to lag recent improvements in functionality. As noted in Skot Kortje’s column in today’s Globe & Mail (Toronto), while “the S&P/TSX composite index retreated below its trend line after losing 300 points earlier this month, telecom stocks are up 7 per cent and are the best-performing sector this spring.” Most are also aware that a number of high-tech IPO’s have been received far better than expected.

Of course, I did have to provide a forecast of sorts to my audience, and I used the same one I mentioned after hearing some of the world’s best minds at the CFA Conference a few weeks ago: Sunny with a chance of showers! We’ve literally (weather across US and Canada especially) and figuratively (pause in global economy) been trapped in a storm of sorts. Here is one slide from my presentation at the conference (which was an outstanding event in my opinion).

Symptoms I anticipated (not because I can predict anything, it was just inevitable) of the stormy economy are now evident. Caused by Japan’s interruption of trade and international funds flows, not to mention ‘leaks’ in the financial crisis ‘bandages’ slowed things down considerably as was expected. Volatility is at extreme levels and seasonally the summer months usually coincide with stock market fatigue. The opening title is of course supposed to be a joke: Definition of MARKET CORRECTION – The day after you buy stocks! Like most humour, its funny because it’s so TRUE for the average investor, and not really funny for most people who are average investors (these folks really should read A Maverick Investor’s Guidebook).

Now that headlines are riddled with items like the following: “No Need to Fear the end of U.S. stimulus”; “As consumers tire, a dimmer outlook”; and “US home price index falls to double-dip in March-S&P” – perhaps its time to remember that all this ‘news’ is historical and the future not nearly so bleak. Despite all the myopic opinions you read daily, this next slide shows you where we actually are in this global recovery. 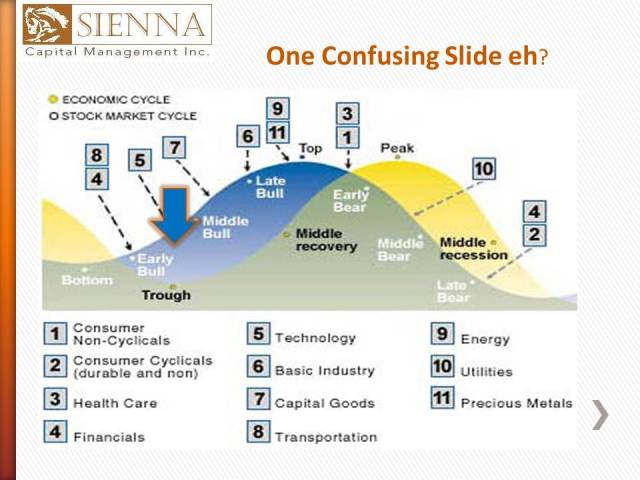 Yes, it’s early days in the recovery but people have a tendency to compress their sense of time – no doubt biased subconsciously by the brevity of our individual lifespans. Evidence is plentiful however that the world has barely begun to convalesce from the financial crisis and its aftermath. Longer term, there’s much good yet to come once this correction is fully digested.

It’s especially difficult to determine whether the market’s adjustment to the current reality has been sufficient. There’s no question expectations and valuations were excessive but by how much? When examining a longer term picture (S&P500 and NASDAQ indexes) it’s easy to get jittery: 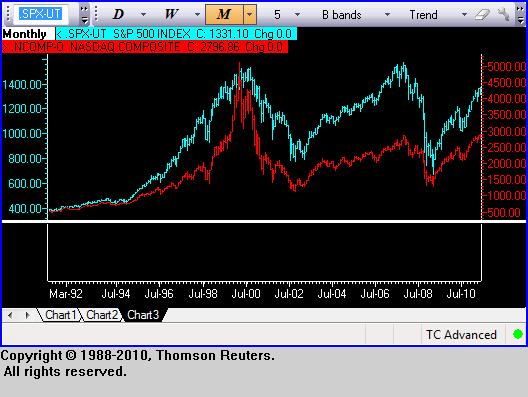 There’s been a fast and furious comeback – much faster than what would appear warranted looking at the data. This correction (storm) is barely a blip.

What to do? Take advantage of the correction by putting some cash into sectors/stocks that got beaten up too aggressively, but also begin to broaden your perspective. When the umbrella gets put away, those businesses I’ve talked about in the past – growing with solid balance sheets (because rates will rise one day) and out of favour will see the sunshine. For the record, my best advice is ‘do as I say, not as I do’ but it’s only fair to share what I own personally once in awhile. I recently gave up on my Research in Motion (ouch) – proof that I too can be foolish and stubborn by hanging on too long – yet my reasoning is that thanks to the correction there were/are other names worth rotating to. Examples would be TECK and AGNICO, two names I bought believing they were oversold. I picked up up some Agrium and Paladin recently as my “nobody left to sell them” holdings. Uranium stocks (Cameco) will require some serious patience but once the panic wears off (it always does) investors will acknowledge nuclear power remains a viable and growing source of energy for emerging economies with no oil and gas reserves or coal deposits. As you might have guessed, I still like the lumber names (and would own more of them if I had the money) such as West Fraser Timber. And consistent with my ‘cap spending’ theme own Celestica, Cisco and JDS. One area I believe will gather some momentum is health care (Nordion) as the cycle matures.

Don’t forget, short term/cash equivalent securities are most attractive when they seem least attactive. And having some liquidity handy during these periods of foul ‘financial’ weather will allow you to deploy funds when markets suffer the occasional correction.

Malvin Spooner is a veteran money manager, former CEO of award-winning investment fund management boutique he founded. He authored A Maverick Investor's Guidebook which blends his experience touring across the heartland in the United States with valuable investing tips and stories. He has been quoted and published for many years in business journals, newspapers and has been featured on many television programs over his career. An avid motorcycle enthusiast, and known across Canada as a part-time musician performing rock ‘n’ roll for charity, Mal is known for his candour and non-traditional (‘maverick’) thinking when discussing financial markets. His previous book published by Insomniac Press — Resources Rock: How to Invest in the Next Global Boom in Natural Resources which he authored with Pamela Clark — predicted the resources boom back in early 2004.
View all posts by Mal Spooner →
This entry was posted in Random Thoughts and tagged agnico, alternative, cameco, capital, cash, celestics, cfa, cisco, consumers, correction, currency, cycle, dollar, ETF, euro, flows, forecast, funds, Greece, hedge, international, interruption, investments, investor, ipo, Japan, jds, mal, malvin, market, maverick, momentum, NASDAQ, paladin, predict, predictions, s&p, securities, spending, spooner, stimulus, tech, technology, teck, telecommunications, trade, U.S.$, uranium, US$, volatility, west fraser. Bookmark the permalink.

1 Response to MARKET CORRECTION — The day after you buy stocks!