Sell in May and go away? Smarter to buy in July!

Seems we may be getting a taste of the seasonality I warned about in prior postings (and discussed in my literary masterpiece A Maverick Investor’s Guidebook – also available as an ebook for the digitally minded).  If you’re like most novice investors and only just now decided to get into the stock market – you’re a bit late but not at fault.  Read the book and subscribe to this blog thing of mine.  Better to get your timing figured out later than never.

Another more serious threat to stocks (can be temporary, but painful nonetheless) I’ve been nagging about is the impact of interest rates creeping higher.  Just to make my point, below is a couple of graphs that illustrate what happened back in 1994 when it was time for the central banks (and/or the guys that trade billions of dollars in bonds and are happy to do the job when bankers won’t) to put the brakes on to stem the rising tide of inflation.

What’s going on in this picture?  A common measure of ‘value’ is the price of the stock divided the company’s earnings (P/E ratio).  I’d like to try to keep this as simple as possible for my laymen friends.  Think of it this way:  Say a stock yields a 5% dividend, and interest rates in your money market fund pay 5%.  If I suddenly told you that SpoonerBank would be happy to pay you 10% at almost no risk wouldn’t you sell your stock and lend the money (proceeds of the sale) to me?  The stock you own is suddenly worth less to you.  There’s a better alternative.  When interest rates rise, stocks (and existing lower yielding bonds) decline in value.

The flip side is that corporate profitability (a wild card) may or may not actually be stunted.  Suppose the company’s business is doing so well that it can increase its dividend yield so you’re still happy?  You might want to keep it.

When there’s a solid global economic recovery (or a region or sector that’s growing like crazy) then once the shock of higher rates on market values is digested, economic growth and corporate profitability may prove to be strong enough to get stock prices moving up again.  As I’ve mentioned in previous commentaries, there is also a bit of sector rotation underway.  Early business cycle winners (commodities, precious metals) make way for mid-cycle sectors.  These won’t be immune from an interest rate shock, but they will recover quickly as their fortunes improve. 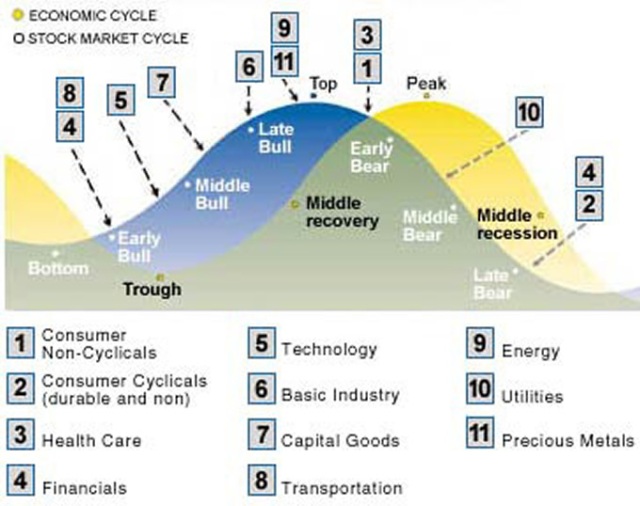 The above chart provides an example, but is much to simplified (and dated) to capture the meat and potatoes of all that occurs in a cycle – because each one is different in many ways. 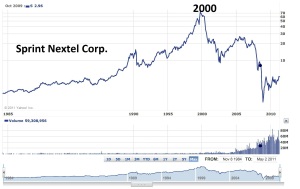 HOT stock in its day!

Industries (Google, Apple) that might already be thriving in this cycle probably didn’t even exist 20 years ago, and others that were the rage a little more than a decade or so ago can be pretty ho-hum today.  Whether these are again gems (value plays) for the picking or just dead money is a matter of judgement –  if you find it too hard to make risky decisions or are loathe to do a bit or research then find another hobby.

Am I predicting a seasonal summer slump coupled with a correction induced by rising interest rates?  If you ask me, predictions are a gamble.  Instead I am anticipating the inevitable; which is what makes investing successful. 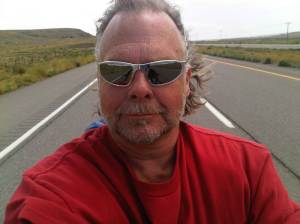 Malvin Spooner is a veteran money manager, former CEO of award-winning investment fund management boutique he founded. He authored A Maverick Investor's Guidebook which blends his experience touring across the heartland in the United States with valuable investing tips and stories. He has been quoted and published for many years in business journals, newspapers and has been featured on many television programs over his career. An avid motorcycle enthusiast, and known across Canada as a part-time musician performing rock ‘n’ roll for charity, Mal is known for his candour and non-traditional (‘maverick’) thinking when discussing financial markets. His previous book published by Insomniac Press — Resources Rock: How to Invest in the Next Global Boom in Natural Resources which he authored with Pamela Clark — predicted the resources boom back in early 2004.
View all posts by Mal Spooner →
This entry was posted in Random Thoughts and tagged baa, buy, corporate, correction, dividend, earnings, economic, global, guidebook, inflation, interest, investors, long, mal, malvin, market, maverick, may, P/E, profitability, rates, ratio, recovery, rising, seasonality, sell, spooner, stock, stocks, ten, term, treasury, year, yield. Bookmark the permalink.