While most of the continent is on some sort of vacation (March break, family holiday) the Japanese and financial markets are in turmoil following the devastation.  Japan is waiting for it all to end so they can begin to rebuild, while the financial community is desperately trying to avoid being caught in its own aftershocks.

Sometimes, when you don’t know what to do, it’s best to take some time and DO NOTHING.  I did this over the weekend, and yesterday – in fact went for a spin on my bike in the cold to clear my head.

Effectively this crisis has managed to convert what should have been a normal 2% – 3% correction  (see previous postings) into something much deeper.   According to
Ford Equity Research – below are the success factors for stock picking that were driving the U.S. stocks a couple of weeks ago – before the mayhem.

It was a momentum market (driven by short-term earnings, mid to smallish sized companies) typical of ocassional frenzies of desperate buying.  Most important, the buying during such frenzies is usually in all the wrong areas – past performance driven rather than future performance.

Since the best performing funds would’ve been heavily invested in resources, money flowed into them – in turn those fund managers bought more of the same and the ‘bullishness’ was exagerated in the weeks before the correction.  Japan will have two affects:

– also look for ‘baby thrown out with the bathwater’ names – in fact they may be stocks you sold previously and have suddenly been battered into good value once again.  I sold Linamar after it ran up earlier in the year, but it’s back to what I consider good value again. 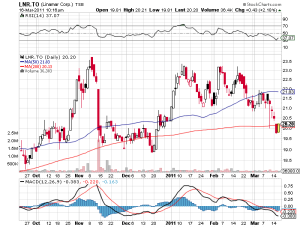 Example - I sold Linamar and it's back to what I think is good value.

The greatest boom Europe ever experienced was rebuilding Germany and other countries devastated by World War II.  Japan is a natural disaster, and although some businesses will certainly suffer in the short term, replenishment will occur and provide a lift to many; either in terms of higher demand (inventory backfill for instance) or higher pricing (shortages, such as lumber).

And then there’s those opportunities presented by panic.  If the Chinese are kooky enough to be running imports from Japan (that arrived even before the earthquake/tsunami) by a geiger counter, then Cameco must become a good buy candidate in here somewhere – after all Europe is still powered by primarily nuclear power and this isn’t the first nor will it be the last nuclear incident.  Like all technologies, this source of electricity will evolve and improve over millenia.

The global economy is still on the road to recovery, and investment decisions must take the overall ‘road map’ into consideration.  There will always be occasional roadblocks and detours like we’re experiencing now (and of course watch for the summer doldrums to hit in a couple of months – seasonality always plays its part) but look towards the ultimate destination and the way to get there will be evident every step of the way.

Malvin Spooner is a veteran money manager, former CEO of award-winning investment fund management boutique he founded. He authored A Maverick Investor's Guidebook which blends his experience touring across the heartland in the United States with valuable investing tips and stories. He has been quoted and published for many years in business journals, newspapers and has been featured on many television programs over his career. An avid motorcycle enthusiast, and known across Canada as a part-time musician performing rock ‘n’ roll for charity, Mal is known for his candour and non-traditional (‘maverick’) thinking when discussing financial markets. His previous book published by Insomniac Press — Resources Rock: How to Invest in the Next Global Boom in Natural Resources which he authored with Pamela Clark — predicted the resources boom back in early 2004.
View all posts by Mal Spooner →
This entry was posted in Random Thoughts and tagged correction, crisis, earthquake, economy, financial, global, guidebook, investor, investors, Japan, mal, malvin, markets, maverick, S&P, selection, spooner, stock, stocks, tsunami, value. Bookmark the permalink.